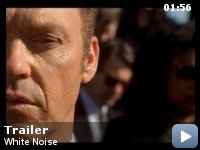 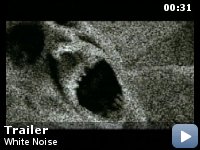 An architect's desire to speak with his wife from beyond the grave, becomes an obsession with supernatural repercussions.

Storyline
When the unexpected happens, architect Jonathan Rivers has become a grieving widower, wallowing in deep confusion over the death of his wife. But a paranormal expert approaches Jonathan with the unlikely: the ability to hear his wife from beyond the grave. Through a form of unusual communication known as EVP (Electronic Voice Phenomenon), Jonathan will finally be able to see his wife. But in doing so, Jonathan has drawn himself into a much more complex situation when his curiosity becomes an obsession. Only that obsession will have him confront those not of this world, and some of them don't approve of Jonathan's interference with their destructive nature.

Taglines:
TV, radio, even telephone… new door of the spirits

The recording used in the trailer that is attributed to Stanley Searles ("I love you.") is thought to be the "ghostly" voice of Searles himself, a former politician who died in 2002. The recording was said to have been made by Searles' daughter, an well-known EVP researcher named Karen Mossey.

Jonathan Rivers:
[Anna has just gotten off the phone with John's ex-wife]
What did she say?

Anna Rivers:
She said she can't make it.

Mike Rivers:
Does that mean I get to skip school?

Anna Rivers:
No, it means I take you instead. Nice try.

Jonathan Rivers:
Was good try, though…

Are some voices better off not being heard?


Interesting. Intense. Somewhat original. All words to describe a
conversation with Johnny Betts. But they also apply to Michael Keaton's
White Noise. What we have here is a ghost story that tackles the
subject of electronic voice phenomenon, or, as the cool kids like to
call it – EVP.

For those of you who, unlike Johnny Betts, aren't master ghost hunters,
EVP is the alleged communication by spirits through the white noise of
staticky radio stations, television stations, and other electronic
devices. People truly believe in it, and if you do a quick search on
the Internet then you can find plenty of websites with audio files they
say prove the existence of EVP. Detractors will brush this off with
explanations of the "chaos theory" and cross modulation. I'll let you
do your own research if you're interested in the subject.

If you're looking for a factual exploration of EVP's possible
legitimacy, then you won't find it in White Noise. This is a movie that
takes a subject popular with ghost hunters and glorifies it. It reminds
me a little of The Mothman Prophecies, which was a fictionalized
account of what was supposed to be a "true story." I have no problem
with that. That's what movies are all about.

Michael Keaton crawls out from underneath whatever rock he's been
under, does his best "Bruce Willis in The Sixth Sense" impersonation,
and dives into the world of receiving messages from the dead. Folks,
you can nitpick the logic to death if you want, and trust me, most
critics are. "Why would he just put his successful life on hold and
spend all his time trying to receive messages from his wife through a
bunch of radio and TV static?" Dunno. The tragic death of a spouse can
do weird things to people. Plus, you know, IT'S A MOVIE! And in the
movie, he actually does receive messages from the dead. I guess he
figured he'd try it; it worked, so he got more involved. Lighten up.
It's called fiction.

"Yeah, well, if his wife wanted to contact him, then why wouldn't she
send him clearer messages? Why does it have to be through static?"
BECAUSE THAT'S WHAT EVP IS ALL ABOUT! Take it up with the proponents of
EVP, not the movie. I totally agree that one of the things that makes
so many people skeptical about EVP is that the messages are never
complex. If I heard an EVP that said, "Tell Johnny Betts that the
afterlife rules, and he should keep the Movie Mark going strong," then
I'd probably be convinced. But what we get is a lot of one syllable
words and sounds strung together. That's not the movie's fault. Deal
with it and move on.

As some of you know, I'm a huge fan of the thriller/horror genre.
Admittedly, White Noise isn't one of the best of all time in the genre,
but that's OK. It didn't convince me to run home, record a static TV
channel for hours, and then play it back to see if Uncle Jack was
sending me a message from the great beyond. Like an apology for that
little streaking stunt that completely ruined my 16th birthday party.
However, what the movie did do is entertain me. The mystery is
deliberately paced, it kept my interest, and it provided some creepy
moments along the way.

Things start to get pretty intense near the end of the movie, and some
people might not be happy with the finale. But keep in mind that trying
to communicate with the dead is a bit of a dark subject. Some people,
as the movie depicts, think that if they can contact their dead
relatives then they'll have hope, they'll know all is right in the
afterlife. They want some sort of message for closure. But I'm just
curious, what if that message is, "Burning. Hell. I screwed up." ???
I'm guessing that'd be a bit of a kick in the pants.

But getting back to the movie… if there's good in the afterlife,
there has to be evil as well, right? In the movie, contacting the dead
initially seems harmless enough. But why would you think only the good
would respond if you create that human/afterlife portal? What would
happen if evil decided to communicate as well? White Noise has a
viewpoint on that subject, and you can't expect everything to be cute
and cuddly.

Now if you'll excuse me, I'm gonna take a closer listen to this static
coming from the radio. Let's see. Sounds like Uncle Jack! I can just
make it out… "Johnny. Reviews. Not funny. Quit. Now." Um, yeah, just
as I thought – nothing but a little cross modulation! THE GIST White
Noise is an interesting take on the ghost story, using the subject of
EVP as its backdrop. It isn't what I'd call scary, but it's got its
share of creepy moments and effective jump scenes. If you're looking
for a docu-drama on the scientific accuracy of EVP then you might be
disappointed, but if you're in the mood for a few chills to start the
year then White Noise just might suit you.