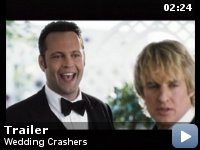 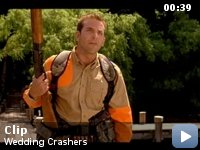 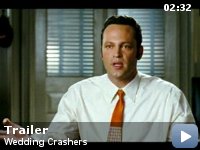 John Beckwith and Jeremy Grey, a pair of committed womanizers who sneak into weddings to take advantage of the romantic tinge in the air, find themselves at odds with one another when John meets and falls for Claire Cleary.

Storyline
Divorce mediators John Beckwith and Jeremy Grey are business partners and lifelong friends who share one truly unique springtime hobby–crashing weddings! Whatever the ethnicity of the wedding party–Jewish, Italian, Irish, Chinese, Hindu–the charismatic and charming duo always have clever back stories for inquisitive guests and inevitably become the hit of every reception, where they strictly adhere to their proven rules of wedding crashing to meet and pick up women aroused by the very thought of marriage. At the tail end of another successful season of toasting brides and grooms, Jeremy learns that the daughter of Treasury Secretary William Cleary and his wife, Kathleen, is getting married in what is sure to be the Washington D.C. social event of the year. After infiltrating the lavish affair, John and Jeremy quickly set their sights on two bridesmaids, Claire and Gloria Cleary. With the lavish reception in full swing…

Taglines:
They're just a couple of guys who just wanna have fun.

Owen Wilson came up with the line "I think we only use 10% of our hearts."

Audio/visual unsynchronized:
When John and Secretary Cleary are having cigars on the balcony at the wedding, their backs are to the camera. We hear Cleary speaking when he obviously should not be able to because he is puffing on his cigar.

Mr. Kroeger:
I don't have custody of the kids.

Mrs. Kroeger:
You know what?

Mr. Kroeger:
I don't get custody.

Mrs. Kroeger:
It is an insane pathetic joke, what I've had to go through.

Mr. Kroeger:
Right now, right now, she doesn't know where the kids are, do you?

Mrs. Kroeger:
Do not talk about me as a mother.

Witty, raunchy and sure to become a 'classic'


Saw a advance screening of this on Friday night. Hilarious doesn't do
the film justice. You know how in most films you remember the funniest
parts and bring them up as you leave the theater? This one, it's hard
to remember the best parts because there's so many of them.

Unlike his previous films, where Vince Vaughn is usually reduced to the
role of 'scene stealer', here we get a full dose of Babaganush, and
he's in his finest form since 'Swingers'. If you liked him in his
Swingers/Made persona, you'll love him here. Some of the riffs that he
has literally will have you holding your sides with laughter.

Owen Wilson is Owen Wilson. You either like him or you don't. He's more
of the straight man in this film, although he does have some pretty
good lines too, and he has great chemistry with Vaughn, especially in
the scenes where they're fighting. He's the ying to Vaughn's yang.

The movie certainly 'earns' it's R rating. There's a healthy dose of
nudity, sex related hijinks, and f-bombs. But it's not 'gross out'
humor a la American Pie. It pushes boundaries, but not just in a 'shock
value' way. It's genuinely funny.

I saw the movie with a bunch of critics, who usually the jaded type,
were laughing their asses of as well. Guys will love this movie and
will be quoting it for the rest of the year. Girls will love it too
though, and there is a romantic subplot (cheesy at times, but
forgivable given how funny the movie is), with Rachael McAdams doing a
great job as Owen Wilson's love interest. Isla Fischer plays the role
of 'scene stealer' in this one, serving as Vince Vaughn's psycho love
interest. And Chris Walken is Chris Walken.

So overall..inappropriate, hilarious and glorious. Better than
Oldschool. Way better than Anchorman. Best comedy of the year, maybe
the last couple of years.