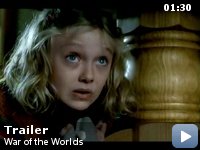 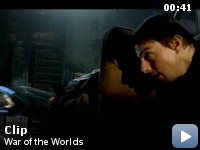 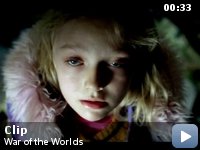 As Earth is invaded by alien tripod fighting machines, one family fights for survival.

Storyline
Ray Ferrier (Cruise) is a divorced dockworker and less-than-perfect father. When his ex-wife and her new husband drop off his teenage son Robbie and young daughter Rachel for a rare weekend visit, a strange and powerful lightning storm suddenly touches down. What follows is the extraordinary battle for the future of humankind through the eyes of one American family fighting to survive it in this contemporary retelling of H.G. Wells seminal classic sci-fi thriller.

The organism seen in the opening sequence is known as the Paramecium, being a unicellular pond water protozoan that is a eukaryote, shown complete with cilia, oral groove, macro nucleus and central vacuole.

Revealing mistakes:
Robbie does not catch anything in his glove when Ray throws the ball at him, a second later a ball magically appears. This happens as Robbie says: "Is it OK with you if I laugh the first 500 times you tell that one?"

Narrator:
No one would have believed in the early years of the 21st century that our world was being watched by intelligences greater than our own; that as men busied themselves about their various concerns, *they* observed and studied, the way a man with a microscope might scrutinize the creatures that swarm and multiply in a drop of water…

A brilliant alien invasion film for the first two acts


What Spielberg, Cruise, and Koepp accomplish here in the first two acts
is nothing short of revolutionary. They've made a big-budget summer
blockbuster about massive destruction and action that manages to
studiously avoid every cliché and expectation of such films. It stays
resolutely on the characters' points of view, showing us almost nothing
they don't see, even to the point of coming tantalizingly close to a
raging battle, then avoiding showing it. It keeps its focus on
character instead of spectacle. The "hero" of the piece remains
decidedly unheroic, wanting only to escape, and trying to talk others
out of fighting back. The purpose of every piece of action is to
frighten and disturb rather than thrill, making ingenious use of
familiar 9/11 imagery. At the end of the second act, it is hands-down
the best alien invasion film ever made, and perhaps one of the best
sci-films of all time.

Then something strange happens. The filmmakers lose their nerve, and
remember that this is an extremely expensive summer film financed by
two studios. Or perhaps it was the fact that it stars Tom Cruise, who
up to this point has spent almost two hours doing nothing but run for
his life. Suddenly, and tragically, the film changes, violating not
only its carefully established tone, but its own internal logic.
Suddenly, Cruise begins to act like a hero, and summer action clichés
force their way into the story like a worm into an apple. The
transition is jarring, and it creates a serious disconnect from the
story.

While it's true that Wells' original ending creates a problem for a
movie, here they try to remain faithful to it, while still shoehorning
moments of triumph into the conclusion. Unfortunately, these moments
come off as alternately false, unbelievable, and meaningless, since it
isn't mankind that defeats the invaders in the end.

Is it recommendable? Well, I suppose that depends on what kind of
viewer you are. If you feel that 75% brilliant material overshadows the
25% that falls apart, then you'll enjoy it. If, however, you're the
kind of viewer who feels that the final impression a movie makes is its
ultimate stamp on your memory, you may be in for a crushing
disappointment. On the other hand, if you're the kind of viewer who
just likes the cliché of the boom-boom summer action spectacle, you're
likely to be bored and frustrated with the first two acts, and only
engage in the end. It is confused about what audience it's trying to
reach, and consequently, isn't likely to satisfy any of them.