Wallace & Gromit in The Curse of the Were-Rabbit 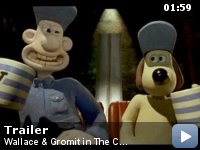 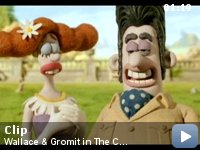 Wallace and his loyal dog, Gromit, set out to discover the mystery behind the garden sabotage that plagues their village and threatens the annual giant vegetable growing contest.

Storyline
It's 'vege-mania' in Wallace and Gromit's neighborhood, and our two enterprising chums are cashing in with their humane pest-control outfit, "Anti-Pesto." With only days to go before the annual Giant Vegetable Competition, business is booming, but Wallace & Gromit are finding out that running a "humane" pest control outfit has its drawbacks as their West Wallaby Street home fills to the brim with captive rabbits. Suddenly, a huge, mysterious, veg-ravaging "beast" begins attacking the town's sacred vegetable plots at night, and the competition hostess, Lady Tottington, commissions Anti-Pesto to catch it and save the day. Lying in wait, however, is Lady Tottington's snobby suitor, Victor Quartermaine, who'd rather shoot the beast and secure the position of local hero-not to mention Lady Tottingon's hand in marriage…

Taglines:
Something wicked this way hops.

When the film was released in Portland, Dorset, UK, the posters had to be altered to remove the word "rabbit". There is a local superstition that prohibits the use of this word (they use terms such as "underground mutton" or "furry things" instead) because burrowing can cause dangerous landslips in the local stone quarrying industry. The film posters in Portland use the alternative slogan "Something bunny is going on."

Continuity:
When the neon carrot sign falls on the hood of the Anti-Pesto van, a big piece of the sign is missing. When the Were-Rabbit bursts through the window of the vegetable shop, the sign now has an even bigger piece missing.

A really Grand Day Out – and A Close Ten!


I saw it at a German press screening. Without giving too much away:
Most critics really seemed to like it very much. There was even
applause afterwards, which is quite unusual for that species. From my
point of view and until now, it was the funniest movie of the year. It
keeps the charm and wit of the three W+G shorts and it is enlarged with
many references to these and other movies. Of course, there are obvious
allusions to monster- and werewolf-movies, especially to "An American
Werewolf in London", "Jaws", "King Kong" and even to Peter Jackson's
"Braindead"/"Dead Alive", but also to other genres.


Characterization was better done in "Chicken Run", but that movie had a
complete new "cast" where introduction was necessary. Here, you are
already able to know the two main characters. So, the new "Wallace and
Gromit"-movie is enjoyed best if you watched (and liked) the shorts
already, yet it also works on its own. "Chicken Run" had the more
convenient, but also more "storytelling" plot. Instead, this new
Aardman masterpiece keeps that crazier and somehow more "isolated"
feeling of the W+G shorts. Children should also enjoy it very much,
especially because of the sweet rabbits (if you love cute bunnies, this
is a must-see for you!!!) and because Gromit has a lot do to and really
steals the show (children also love dogs… 🙂 ). But many jokes are
thought for a more adult audience (there are even soft sexual allusions
in it). The movie manages, like "Shrek 1+2" and "The Incredibles", to
fulfil high level entertainment for the whole family, with adding a
British and at least a little bit darker edge to the humour of American
animated movies.

The animation is – as expected – superb, and they kept true to the
Aardman style because they didn't put in too many digital effects – I
realized just a few when it came to Wallace's inventions.

Finally, the score works fine in the movie, although one of the main
themes definitely is "borrowed" by Randy Edelman's "Dragonheart" score.

The bad thing is: It will probably take another six years from now
until we can see a new animated gem from Nick Park & Co.