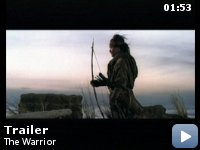 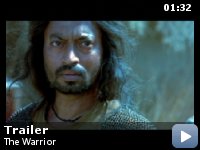 In feudal India, a warrior (Khan) who renounces his role as the longitme enforcer to a local lord becomes the prey in a murderous hunt through the Himalayan mountains.

Storyline
Circa feudal India in the State of Rajasthan is a desert region that is ruled over by a cruel and sadistic Lord, who, with the help of a handful of equally cruel and fierce warriors, led by Lafcadia, weigh a reign of terror upon those who do not submit or dare to oppose him. Long-haired Lafcadia is widowed but has a son, Katiba. Once when Katiba was by himself, he befriends a young girl, who ties a Raakhee on his hand and makes him her brother, and in return he gives her his amulet. When the Lord asks Lafcadia to subdue the villagers of Tarang, they carry out his orders. After the raid while Lafcadia stands by, his warriors rape and loot the villagers, it is then that Lafcadia is surprised by the very same young girl, and it is Katiba's amulet that saves her from being killed. This incident has a deep impact on Lafcadia and he decides to give up his job & sword and seek peace in his village in Kullu in the Himalayas…

The Hindi-language film "The Warrior" was chosen by the British Academy of Film and Television to represent the UK in the "Best Foreign Language Film" category at the 2003 Oscars. The AMPAA took the highly unusual step of rejecting the movie because although the film had a British-born director (of Indian ancestry) and was co-produced by three British companies, the film did not qualify as British since "Hindi was not a language indigenous to the U.K." The British Academy was forced to submit its second choice, the Welsh-language, "Eldra". In an ironic twist, "The Warrior" went on to win "Best British Film" at the British Academy Awards the following year, although it lost "Best Non-English Film" to a film from Spain.

Revealing mistakes:
Before The Warrior tosses his dagger into the stream, a wire attached to the hilt to retrieve it from the water off-camera is clearly visible on the palm his left hand.

A very worthwhile film, assuming you don't need rivers of blood, yucky
closeups of severed body parts or explosions every twelve minutes to hold
your interest.

Most stories about the killer who renounces violence feature a lip-smacking,
almost pornographic delight in the violence itself. This film successfully
avoids that trap.

The story has echoes of samurai tales to it, though the settings are the
deserts of Rajastan and the mountains of the Himalayas – lowlands bad,
mountains good, as always.

The lead actor is both expressive and restrained, the support is sufficient,
and the whole experience moving. I hope a DVD version gets issued in the US
before too long.