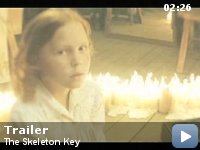 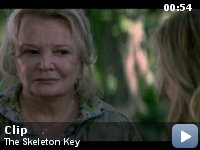 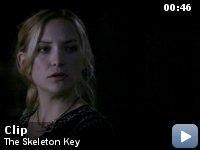 A hospice nurse working at a spooky New Orleans plantation home finds herself entangled in a mystery involving the house's dark past.

Storyline
A young woman helping care for an invalid in New Orleans finds herself caught in the middle of morbid going-ons centered around a group of Hoodoo practitioners. (Hoodoo is not Voodoo, it's of a different culture. Voodoo is Haitian while Hoodoo is an old African American magic that just like Voodoo only works if you believe in it.)

Continuity:
When Caroline is giving Ben his second bath she soaks the sponge with soap and water. A second later when she goes to get the mirror her hand is completely dry.

Caroline Ellis:
[reading from Treasure Island]
I lost no time, of course, in telling my mother all that I knew, and we saw ourselves at once in a difficult and dangerous position. Something must speedily be resolved upon, and it occurred to us at last to go forth together and seek help in the neighboring hamlet…
[…]

They Do that Hoodoo that they Do so…eh, Relatively Well


Horror movies have become a dime a dozen in the past few years. The
watchable ones seem to fall into two categories of late: misguided
psychological thrillers headlined by a consummate actress (witness
Naomi Watts in "The Ring 2" or Jennifer Connelly in "Dark Water") or
over the top slasher/gore-fests with serious kitsch value (witness
Romero's enjoyable zombie flick "Land of the Dead" or Rob Zombie's
sadistic "Devil's Rejects"). All of the rest have pretty much been
unbearable cliché-ridden hack jobs ("White Noise," "Darkness Falls,"
etc…)

Oddly enough, "The Skeleton Key" doesn't fall into any of these
categories and it comes across as a breath of fresh air, an
old-fashioned throwback to the traditional Gothic mystery thriller,
where a pretty female outsider (Kate Hudson acquitting herself rather
nicely here as the hospice nurse traveling deep into the Bayou to care
for an apparent stroke victim) moves into a big old house/castle that
just might be haunted. The director and screenwriter start things
slowly, and do a nice job of creating a realistic setting before
letting all the mumbo-jumbo slowly and effectively creep in. Gena
Rowlands and John Hurt (immobile and mute for most of the film) are
fairly good in their respective roles as the married couple with more
than just skeletons in their closets. We've seen this stuff all before,
but it's done fairly well here with no sense of flash or pretensions,
and as silly (and potentially offensive) as all this Hoodoo in the
Bayou stuff is, the audience is treated to a twist ending that makes
perfect sense in the context we have been given. This isn't a twist
ending for twisting sake, but a fitting conclusion to the story.

"The Skeleton Key" tries to remind people of classics like "Rosemary's
Baby" and "The Others." It may not ultimately hold a candle to those
films, but it's a very entertaining way to spend a few hours.