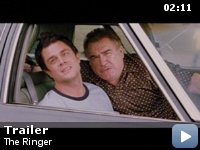 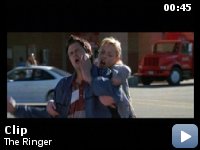 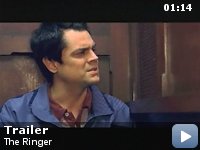 A young guy's only option to erase a really bad debt is to rig the Special Olympics by posing as a contestant.

Storyline
This comedy is about two guys who decide to rig the Special Olympics to pay off a debt by having one of them, Steve (Knoxville), pose as a contestant in the games, hoping to dethrone reigning champion, Jimmy. Mentally-challenged high jinks and hilarity surely follow.

Originally set for a US theatrical release in 2004 the film was pushed back due to studio executives' concern over its content.

Continuity:
In the cafeteria, Jeffy reaches for a bottle of ketchup, misses, and knocks over a bottle of mustard. Embarrassed, he retracts his hand. The camera instantly pulls back to show Billy laughing at Jeffy, and shows the mustard bottle standing up, despite there not being enough time for someone to straighten it.

This Movie Is Great For Special Olympic Athletes!


As Head of Delegation for a Special Olympic Texas team who has athletes
featured in this movie, I have to take exception with the concept of
assuming the athletes are being teased and made fun of in this movie. I
spent most of 3 months on the set watching the filming 2 years ago and
I know how very carefully Special Olympics International has watched
the development of this movie. They have been involved in every aspect
of this movie, from script development to final product. I also know
how very careful Special Olympics is with putting their seal of
approval on projects. They simply do not endorse ANYTHING, yet they are
completely and 100% behind this movie.


I have seen the movie and can't wait to take every member of my team.
Many of them have seen the movie and indeed are in it. At the premiere
in Austin December 6 my athletes were howling with laughter and having
a great time. While I will admit that Johnny Knoxville, the Farrelly
Brothers and Special Olympics do not seem to make the best mix in the
world, this works. And it is a beautiful movie. There are a few dirty
words (like Forrest Gump) and a few tasteless jokes, but it is
screamingly funny and has worlds of heart. The athletes are always,
ALWAYS treated with the utmost respect. Unlike most movies about the
mentally handicapped, there are major parts in this movie played by
genuine special Olympic athletes, and they used some 200 special
Olympic extra's. This was a labor of love, on both sides of the camera.
It deserves to be viewed and respected. The producers had a vision of
bringing to life and light the fact that mentally challenged people are
well rounded and enjoyable people. They did it beautifully. Go see the
movie and laugh with all your heart.