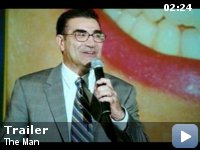 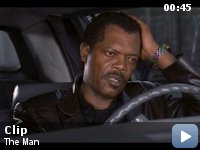 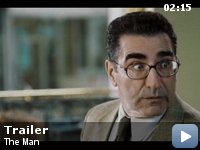 Special Agent Derrick Vann is a man out to get the man who killed his partner but a case of mistaken identity leads him to Andy Fidler, a salesman with too many questions and a knack of getting in Vanns way.

Storyline
A federal agent turns up dead and a hardcore undercover agent, known as Derrick Vann heads off to try and recover the stolen arms and find the killers. Andy Fiddler is an ordinary family man and a dentist, and is out heading to a conference, when he gets stuck in the same mess. Criminal Kane believes Fiddler is 'The Man' behind it all and offers him a gun. Vann spots him and drags him across town, with him posing as the actual 'Man'.

Taglines:
One guy walks the walk. The other talks and talks.

A working title for this film was "El Maninator".

Errors made by characters (possibly deliberate errors by the filmmakers):
In the movie Eugene Levy is supposed to be a salesman for dental hygienic products and equipment however he has horrible teeth! His bottom teeth are extremely crowded, stained and yellowed. He would not be a very convincing salesman in real life.

Special Agent Derrick Vann:
[to Internal Affairs]
You wanna charge me with not being upset, go right ahead.

It's really not that bad


What can be expected from a movie called The Man? A comedy from the
director of American Outlaws starring Samuel L. Jackson riffing on his
Jules character from Pulp Fiction with the dad from American Pie can't
be decent, can it? Surprisingly, this new fall comedy is actually
humorous if not outright hilarious, and it is certainly better than it
looks on paper or in the TV-spots. It is a great example of a "pleasant
surprise." That's not to say the premise isn't pretty cookie-cutter:
Andy Fidler, an innocent dental tools salesman (cue Eugene Levy) gets
caught up in an illegal weapons plot and must deal with Special Agent
Derrick Vann (Samuel L. Jackson playing what he plays best) and his
crazy world.


Vann and Andy happen to be polar opposites, as well. What a surprise.

If this all sounds strangely like the average buddy comedy about the
well-mannered white guy and the tough-as-nails black guy who don't get
along at first but learn to appreciate each other and then become best
friends, well, it pretty much is. However, unlike many buddy comedies,
this one is actually enjoyable.

At a brisk 83 minutes the movie never lags too much, and instead of
focusing on its implausible story or cliché subplots The Man keeps it
mainly about the chemistry between its two main characters. Also,
although much of the script is forgettable seldom is pure boredom
reached.

Traps such as unoriginal overused subplots and gaping plot holes can
often catch many unsuspecting buddy comedies by surprise and help make
them DOA (dead on arrival), but The Man actually seems to revel in its
unoriginality, content with not pushing boundaries but with instead
just having some fun.

In the acting department, Samuel L. Jackson is especially a surprise.
While it seems he would be pretty much bored of playing the same badass
character time and time again, he manages to come off convincingly and
even have some fun riffing on his theatrical persona. However, the
movie never winks too much at the audience and it is able to stand on
its own two feet rather than constantly say, "Hey guys don't mess with
the Samuel L!" The fact that Eugene Levy is very talented at playing a
character who is truly clueless also helps. Both Jackson and Levy have
good chemistry and even though it's pretty much a two-man show The Man
comes off without a hitch because it knows what its strength is: Levy
and Jackson.

The only other actor that even warrants a mention really is Luke Goss
as Joey. He helps make a mundane role tolerable and interesting. He
doesn't steal the show, but he has fun with being the typical criminal
villain surrounded by non-descript henchmen.

In the end, much credit should go to director Les Mayfield for his
quick pacing and use of a variety of jokes. Again, with a movie that is
basically just a rehash of many other comedies it is smart to never
dabble on one topic too much and to let the actors roam free and get
into their performances. The Man never becomes showy with fancy special
effects or tons of big star cameos. Rather, it makes do with what it
has.

Sure, there are a lot of visual gags and the infamous "fart jokes"
(those don't seem to ever get old for Hollywood), but it's all in good
fun and there's enough semi-clever situation humor to keep the entire
thing moving. Sometimes it's even evident what is about to happen, but
when it does it happens in a way that is just unexpected enough to be
humorous in its absurdity. One gag involving the drop off of "some
merchandise" at a crowded street corner is a nice play on the clichés
of so many other movies very similar to this.

In the end, lives won't be changed because of The Man and it probably
won't be as well received or as popular as something like the Wedding
Crashers, but funny is funny and for an evening out at the movies a lot
worse things could happen. Just look at The Cave.

Critic's Conclusion: It's not the funniest movie of the year but that
doesn't mean it isn't funny at all, and what The Man lacks in
originality it more than makes up for in charm mixed up with some
lively performances. It's better than the TV-spots might lead you to
believe, and although it's not a must see there are a million worse
ways to spend a few bucks and a couple of hours.