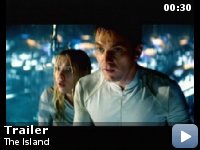 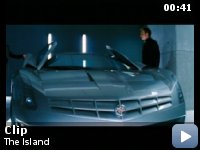 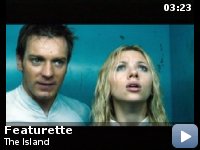 A man goes on the run after he discovers that he is actually a "harvestable being", and is being kept as a source of replacement parts, along with others, in a Utopian facility.

Storyline
Lincoln Six-Echo is a resident of a seemingly Utopian but contained facility in the year 2019. Like all of the inhabitants of this carefully controlled environment, Lincoln hopes to be chosen to go to the "The Island" – reportedly the last uncontaminated spot on the planet. But Lincoln soon discovers that everything about his existence is a lie. He and all of the other inhabitants of the facility are actually human clones. Lincoln makes a daring escape with a beautiful fellow resident named Jordan Two-Delta. Relentlessly pursued by the forces of the sinister institute that once housed them, Lincoln and Jordan engage in a race for their lives to literally meet their makers.

The turtle-shaped car in Tom Lincoln's display case is a model of John Cobb's "Railton-Mobil Special", which broke the World Land Speed Record three times in 1938, 1939 and 1947. The latter record stood for nearly 16 years, when it was broken by Craig Breedlove's "Spirit of America" jet car. Subsequent piston-engined cars have only pushed up the record by 11 m.p.h.

Continuity:
The elevator doors open twice when the guards go to see the disturbance that Gandu 3 Echo caused.

God-Like Man:
You're special. You have a very special purpose in life. You've been chosen. The Island awaits you.


I worked at Eworks when I first saw the trailer for "The Island." I
wasn't blown away by the trailer and neither was anyone I worked with,
mainly because we couldn't figure out what the hell the movie was
about. Several trailers and TV spots later, I still felt the same way
about it. The only thing about the film that interested me was the
cast. I really like Scarlett Johansson, Ewan McGregor, and Steve
Buscemi. So considering that there was nothing else out this weekend I
decided to give "The Island" a chance.


"The Island" is basically about the end of the human race or so we
think. The movie's basic storyline for the film is this: the human race
gets contaminated and there is this compound that rescues people and
decontaminates them. So all of the world's survivors live in this
compound with the ultimate goal of going to the Island, where everyone
can live a safe and happy life. However, Lincoln (Ewan McGregor) finds
that this compound doesn't make much sense and begins to question the
whole idea of the island. It isn't long before Lincoln finds out the
truth behind the island but just when he does his best friend Jordan
(Scarlett Johansson) gets selected to go to the island. It is now up to
Lincoln to save Jordan and the rest of the people in the compound from
going to the island and ultimately finding out the truth of their
existence. An intense and action packed film ensues…

Like I said earlier this film never really interested me but since this
summer is really lacking in films, I gave it a chance and I am glad I
did. This movie may actually be Michael Bay's move from all action to
action and story. While there are still some plot holes in the film and
the script could use a little fixing up, the majority of the film was
well done especially for someone like Michael Bay. The story was very
interesting and seemed pretty realistic. Sure it had a few far-fetched
action scenes but what's a summer action movie without them? But on the
whole it was action packed, entertaining, interesting, and thought
provoking film(wow who would believe that one day I could say that
about a Michael Bay movie).

I also never thought I would see Scarlett Johansson play in a Hollywood
action/thriller and from her scenes in the trailer it looked like I
never wanted to either. However I was pleasantly surprised by how she
pulled it off. She seemed to fit the role and was very good at it. But
if you ask me would I rather see her in big budget popcorn flicks or
independent films, I would still pick the independent films. Ewan
McGregor was actually good as well, and again I never thought I would
see him pull off a role like this but I guess that proves that both
McGregor and Johansson are good actors. It's was also fun to have Ewan
and Scarlett giving the film a few chuckles here and there. Steve
Buscemi is our comedic relief guy as well as the guy who basically
explains the whole island thing to us. He was good but I felt was cut
out of the film awfully fast.

Bottom line is that I was pleasantly surprised with the outcome of "The
Island." It was a lot better then "War of the Worlds" which basically
had all action and no story. This film doesn't have a perfect story,
but it still has one and has an interesting concept at that. This film
isn't going to win best picture any time soon but it's a good summer
blockbuster. The basic premise of the film to me seems very believable
in the near future. I just suggest buying the biggest popcorn and soda
at the theater and enjoy! MovieManMenzel's final rating for "The
Island" is a 7/10

TagsJordan USA
Charlie and the Chocolate Factory
Must Love Dogs