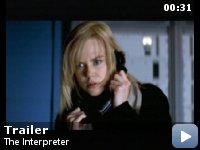 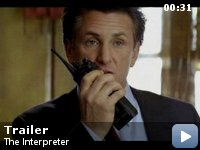 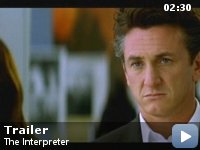 Political intrigue and deception unfold inside the United Nations, where a US Secret Service agent is assigned to investigate an interpreter who overhears an assassination plot.

Storyline
Escalating events begin when U.N. interpreter Silvia Broome alleges that she has overheard a death threat against an African head of state, spoken in a rare dialect few people other than Silvia can understand. With the words "The Teacher will never leave this room alive," in an instant, Silvia's life is turned upside down as she becomes a hunted target of the killers. Placed under the protection of federal agent Tobin Keller, Silvia's world only grows more nightmarish. As Keller digs deeper into his eyewitnesses' past and her secretive world of global connections, the more suspicious he becomes that she herself might be involved in the conspiracy. With every step of the way, he finds more reasons to mistrust her. Is Sylvia a victim? A suspect? Or something else entirely? And can Tobin, coping with his own personal heartache, keep her safe? Though they must depend on one another…

Taglines:
The truth needs no translation.

Despite the high security at the U.N. and terror alerts, crew members were allowed to bring in knives for their work.

Errors made by characters (possibly deliberate errors by the filmmakers):
The building where Simon Broome is shot, the Monumental, is a bullfighting ring, a remnant of Mozambique's Portuguese era. At the end of the film, as Silvia reads from her brother's list, she calls it a soccer stadium.


The Interpreter is an extremely packaged political thriller that
contains only a little punch. The main reason I gave it a go was Sean
Penn who seems to rarely make mistakes selecting his work. Nicole
Kidman can be a mixed bag, and Sydney Pollack a competent seasoned
veteran director. All three performed well without setting the screen
alight.

The use of the United Nations building was a big plus and definitely
gave the movie more realism. It also gave the viewer more of an idea on
what a massive organisation the UN is.

Even though "The Interpreter" was enjoyable the ending was definitely a
disappointment. It wasn't that it was necessarily wrong, just that you
knew what was coming. This was the "Hollywood Factor" showing through.
Perhaps the reason it didn't turn into real Hollywood trash was the
fact it was filmed and produced in New York.