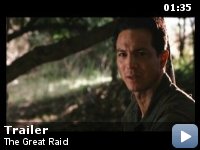 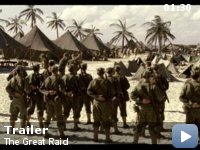 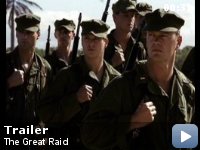 Taking place towards the end of WWII, 500 American Soldiers have been entrapped in a camp for 3 years. Beginning to give up hope they will ever be rescued, a group of Rangers goes on a dangerous mission to try and save them.

Storyline
Set in the Philippines in 1945 towards the end of WWII, under the command of Lieutenant Colonel Henry Mucci and Captain Robert Prince, the 6th Ranger Battalion undertake a daring rescue mission against all odds. Traveling thirty miles behind enemy lines, they intend to liberate over 500 American Soldiers from the notorious Cabanatuan Japanese POW camp in the most audacious rescue ever.

Taglines:
A heroic tale of courage and triumph.

Many of the Extras were recruited off the streets of the Gold Coast.

Lt. Colonel Mucci:
How you feelin?

Captain Prince:
Thank-you Sir.
[They salute each other and walk off]


While Hollywood has gone after the Nazis and the European campaign in
World War II over and over again, ad nauseam, little has been produced
depicting the Pacific Theatre or the thousands of Americans and others
who perished there.

In fact, only a handful of motion pictures have touched on the subject
over the last two decades, namely Steven Spielberg's "Empire of the
Sun," Terrance Malik's "The Thin Red Line," and the Nicolas Cage bomb,
"Windtalkers." The best film in this genre was probably 1957's "Bridge
On The River Kwai," which won Oscars for David Lean and Alex Guinness,
among others, but that was almost 50 years ago.

Now John Dahl ("Rounders," "Joyride," the TV series "Tilt") has shed
some light on a little-known rescue attempt in the waning days of the
conflict in the Philippine Islands. "The Great Raid" is a fine little
film, smart, patriotic and fairly historically accurate.

The film begins with a crisp narration (accompanied by actual film
footage) of the quick successes of the Imperial Japanese Army in the
days following Pearl Harbor. Gen. Douglas MacArthur – thanks to
Roosevelt's decision to devote more to the European effort through the
Lend-Lease to Churchill program – is forced to evacuate the Philippines
and retreat to Australia.

Meanwhile, thousands of American troops are trapped by the swift-moving
Japanese forces on the islands of Bataan and Corrigidor and are
compelled to surrender. While WWII German brutality is everywhere in
motion picture, few have addressed the stark horrors of the Bataan
Death March. Even this movie skirts the terror with a simple voice-over
in filling in the background story of a group of surviving prisoners
held for over three years.

Military minutia abounds with the planning and execution of the
assault, which pits a handful of rangers against over 200
battle-hardened Japanese troops, led by sadistic Maj. Nagai (Motoki
Kobiyashi).

The movie also shows the strong relationship between the Americans and
Filipinos which was not the greatest in the years after the
Spanish-American War, but was cemented against the common Nipponese
enemy. Nice composition between rangers, prison camp and the occupied
capital of Manilla, where civilian nurse Margaret Utinsky (Connie
Nielson, "Gladiator," "One Hour Photo")is working with the Filipino
underground resistance.

This is no "Saving Private Ryan," and the acting sometimes leaves a bit
to be desired, but the strength of the story, the fact it was inspired
by true events, and the historical importance of the film, make this
one a must-see, even for casual fans of the genre. It will not make
much money, but it was very important that it was made.