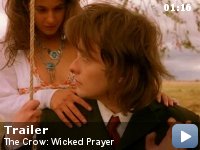 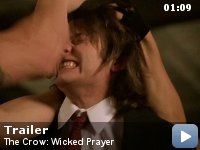 On his way to becoming an immortal demon, gangleader Luc Crash (Boreanaz) orchestrates the murder of Jimmy Cuervo (Furlong) and his girlfriend, Lily (Chriqui).

Storyline
Jimmy Cuervo is a down-on-his-luck ex-con living in a polluted mining town on a reservation that would run him out of town if not for the remainder of his probation. With his time nearly finished, he plans to start a new life with his girlfriend Lily , and leave the town for good. But Luc Crash and Lola Byrne head up a local gang of local Satanists who murder Jimmy and Lily in a brutally ritualistic slaying that they hope will conjure the rebirth of the Antichrist. When the legend of the Crow returns Jimmy from the dead, Jimmy heads out on a one-man path of vengeance that will lead him to El Nino, the leader of the gang that Luc and Lola are in.

Taglines:
He will not rest until he gets his vengeance.

The paraphrased line "you don't win wars by dying for your beliefs, but by making other bastards die for theirs" was said by General Patton in 'Patton (1970)'.

Continuity:
When Lilly and Jimmy are behind trailer talking and kissing, the positions of their arms change several times between shots.

Jimmy Cuervo:
Tell me, did the blood wash off or did you have to scrub really really hard?

Quoth the raven…"Please, no more!"


In the year 1993, Brandon Lee created a very memorable, dark &
beautiful character: The Crow. The movie, with an exceptional script,
smart direction, excellent photography and a brilliant cast, it truly
one of my all time favorites. Everything from the look of the film, the
characters (especially Lee as the Crow), the phenomenal soundtrack and
the overall story of love being stronger than death – I was hooked! I
love that film! I saw it in theaters no less than 8 times.

CITY OF ANGELS was a shallow, bastardized attempt to cash in on the
success of the first film. In some ways, ANGELS almost ripped-off the
original, but in a way that makes me loathe the film. Very
disappointing!

SALVATION, the third in the series was…I can't even remember. I saw
it once, and do not remember being overwhelmed by it or feeling
anything for it.

And now, 2005 brings back the return of The Crow with WICKED PRAYER.
Unlike the first three films, this one takes place in the desert, near
an Indian reservation. I must admit, I was impressed with the
cinematography on this film. The desert scenes, the flashback scenes,
all were well done and looked great.

So…what do I think of the film? The direction? The acting? For
starters the direction of this film was all too often sloppy. It
appeared, more times than not, the film was confused with where it
wanted to go. The characters seemed stuck into scenes, with little to
no direction, and carried scenes with no skill. Each set up seemed and
felt under-rehearsed and underdeveloped.

Edward Furlong is by NO stretch of my imagination an acceptable Crow!
Looking too much like a gay goth groupie, instead of a vengeful angel
set to make the wrong things right. His costume appeared to steal too
much from the original. I felt his performance was bland and tasteless.
There was no emotion displayed by his character. I did not feel pity or
sorry for him, or what happens to him. I was no convinced that his love
was so undying that he could be brought back from the dead. He is no
Brandon Lee! I mean, come on: "Quoth the Raven, Nevermore.
Motherf**ker!" What kind of crap writing is that? Boreanez is wasted in
this film. Though, he has not impressed me much with previous roles
such as Adam Carr in VALENTINE, I still feel he is a solid actor and
really can pull off the bad guy look. However, in WICKED PRAYER, it
never feels like we are 100% sure of what he is doing or why. OK, I get
that he is performing a ritual to become a demon or devil, but where
did this come from? What is in motivation? World domination? I don't
think we will ever know.

Tara Reid….Ugh! And Macy Gray?!?!? And what was up with Dennis
Hopper, in what could only be his worst performance.

None of the cast is able to save this mess! Very upsetting to see the
series continue to be treated this way. What started out 12 years ago
with such an inspiring beginning, is continuing to fall further down
the spiral of sequel Hell!