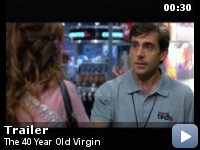 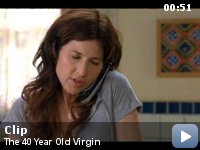 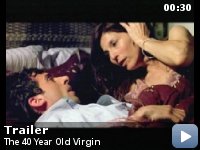 Goaded by his buddies, a nerdy guy who's never "done the deed" only finds the pressure mounting when he meets a single mother.

Storyline
Andy at the age of 40 still hasn't had sex. He lets his secret slip at a poker game with his buds from work. After the revealing all his friends are on a mission to help get him laid. Along the way Andy meets a nice mom: Trish who fall head over heels for each other.

A deleted scene has Andy fantasizing about a television reporter named after one of the film's producers, Shauna Robertson.

Continuity:
In one of the deleted scenes, Andy is shown getting out of the car after Nicky has thrown up on him. However, no vomit is visible anywhere on his clothes.

Joe:
When you gonna get a car?

In the previews, "The 40 Year-Old Virgin" boasts the image of another
immature sex romp about a 40-ish Lonely Guy who suddenly feels the urge
to do the deed simply because he hasn't. Too many past bad experiences
have dampened his enthusiasm to the point that he avoids women
completely. And then the unexpected happens: he falls in love. What's
more, there's a movie out about it, and it's called "The 40 Year-old
Virgin."


The virgin of the title is Andy Stitzer (Steve Carell), who is indeed
40, works as an employee at an electronics store and collects vintage
action figures, which are displayed all throughout his nice bachelor
pad for all to see. He has a lovely home theater system and watches
"Survivor" with his two kind elderly neighbors. He's a pretty
picturesque definition of the Lonely Guy who needs to go out more and
talk to more women.

Now here's the real novelty with this picture: it does the impossible
task of actually dealing with its subject matter in a cute, mature
fashion. This is a movie that could very easily have turned out a lot
differently in the hands of a more transparent team of filmmakers. It
could have descended into endless sex gags and jokes but thankfully
this picture never stoops that low. Sure there are sex jokes here and
there and even a few prods are aimed at the gay community (which are,
in no way, meant to be taken as gay-bashing), as two of the characters
exchange insults towards each other while playing a video game ("Mortal
Kombat: Deception," no less – the ultimate testosterone-driven
fightfest for guys).

As someone who is rapidly approaching 20, collects McFarlane Toys
action figures AND has himself never done the deed, I found this film
amusing and touching in a way that a similar-themed movie could never
have been. I was able to relate to the character of Andy Stitzer more
than anyone in the theater because I was the only teenager present at
this showing; everyone else looked like they were all past 40. A bit
arrogant, I know, but would you ("you" is italicized) still be able to
relate if you were the only teen present at an afternoon screening of
"The 40 Year-Old Virgin"?

Of course Andy has never had sex and wakes up everyday with "morning
rise" (don't ask), and he's pressured by his buddies to try outlandish
methods of gaining the attention of the opposite sex. When it's first
discovered Andy is a virgin, at 40, his three buddies and fellow
electronics store coworkers David (Paul Rudd), Jay (Romany Malco) and
Cal (Seth Rogen) all at first assume he's gay because he's never been
with a woman, which couldn't be any further from the truth. The truth
is, Andy loves women, but past traumatic experiences (revealed
hilariously one after the other in a flashback sequence) have put him
on the sidelines for good.

David, Jay, and Cal each embark on a mission to get Andy laid, so help
them all. But you know that such escapades will only end in disaster,
as proved by one date with Nicky (Leslie Mann), who puts Andy through
the worst drunk-driving experience I think anyone would not want to go
through and he has a rather creepy encounter with Beth (Elizabeth
Banks), the pretty girl who works in the bookstore and is eventually
revealed to be a total sex fiend.

Things brighten up for Andy when he meets Trish (Catherine Keener), the
friendly woman who works at a store across the street that sells stuff
on eBay for people. Hmmm. And with that nice-looking collection of
action figures, you can go figure that in the end a large financial
payoff awaits him, that is if he can ever "do the deed."

At last, this is the sex romp we've been waiting for. It deals with a
very real issue a lot of Lonely Guys probably go through, not that
anything is wrong with being a virgin but let's look at the big
picture: How many of us "Lonely Guys" want to be a lonely guy forever?
The important thing we're taught in this picture is that Lonely Guy
must be himself. I don't think he needs to go through body waxing like
Andy does (which is side-splitting to be honest, and according to this
website and various other news articles, was in fact real, and so was
the blood on Carell's shirt afterward).

"The 40 Year-Old Virgin" was directed by Judd Apatow and co-written by
himself and Carell, which originated as a skit that starred Carell.
Carell is sweet and human, as his character is not some layabout who
approaches this thing with his eyes shut. This is probably one of the
most intelligent romps I've ever seen and is not offensive (a whole
lot) because its characters are treated with dignity and respect. Even
Carell's buddies, who pass off bad advice to cover up their own
relationship insecurities, can be related to on a fundamental level.

The way "The 40 Year-Old Virgin" plays out is indeed funny in the end,
but I'll leave that up to you, the viewer, to observe. Surely, if
anyone can go through the things Andy does and still have the strength
to attract a woman as sexy as Catherine Keener, then it's true: It is
never too late!