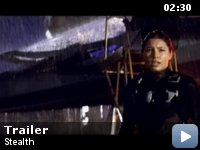 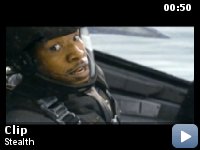 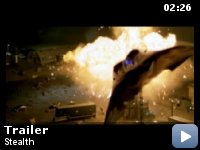 Deeply ensconced in a top-secret military program, three pilots struggle to bring an artificial intelligence program under control … before it initiates the next world war.

Storyline
In the near future, the Navy develops a fighter jet piloted by an artificial intelligence computer. The jet is placed on an aircraft carrier in the Pacific to learn combat manuevers from the human pilots aboard. But when the computer develops a mind of its own, it's the humans who are charged with stopping it before it incites a war…

500 gallons of gasoline were used for the explosion in the Alaska airfield sequence. NASA had to be notified of it in advance because it was so big.

Factual errors:
In the war game scenario at the beginning, the planes are getting heckled by both Anti-Aircraft Artillery and Surface-to-Air Missiles. SAMs are only useful when the planes are flying above 500 feet, however, so they should have been no problem. Likewise AAA does not criss-cross as shown, for fear of destroying each other.

Lt. Ben Gannon:
You know what i think?

A movie I shouldn't have seen and neither should you

Every now and then a movie comes along that really makes you wonder at
the depths of human nature, the very intricate framework that binds us
together in society. Stealth is one such movie, if of course you
replace "human nature" with "Jessica Biel's cleavage", and "intricate
framework" with "mind-numbingly bad plot and acting".

It all begins simply enough with the same old introduction of the
piloting dream team (for more information on high flying dream teams,
please reference Top Gun, Apollo 13, and the 1992 Olympic Men's
Basketball Finals). Surely enough, one of them is a visible minority,
one a woman, and one a version of white machismo incarnate. So, at this
point in the movie, can you already guess who's going to sacrifice
themselves for the team, who's going to need rescuing, and who's going
to save the day? Good, good, and we're only 30 seconds into the opening
credits. Next, enter the 'wave of the future' that's obviously going to
turn evil and yada-yada-yada. Then, of course, mysteriously relocate
the technician who's nervous about the doomsday implications of said
future-wave. Same old, same old. Can we see some boobies yet? Yes, yes
we can.

We then continue aimlessly through this movie as it twists and turns…
and twists some more… and then, seemingly at the end of its contortion,
starts twisting back to where it came from – the sewer. Joined the
whole way by bad dialog, a senseless plot and a host of
mispronunciations, not the least of which was "Tajikistan" (pronounced
tie-gee-kee-stan by our venerable commander), this movie begins on a
downward spiral which ultimately emerges as a two hour Army recruitment
commercial. Cue the rescue, and with it the fact that these pilots all
have better aim than the guys trained to shoot, and you have a movie.

So, what was it about this movie that was supposed to be good again?
Ah, I remember, the special effects, the ones that have been assaulting
our eyes on TV every ten minutes for the past month and a half. They
couldn't possibly fail there, right? Wrong. In some scenes, the planes
would have been better off being constructed of plasticine, and the
terrible digital flames marking the sight of one pilot's unfortunate
and entirely foreseeable demise might as well have been drawn by hand
for all the effect they had.

In short, this movie is awful, but who knows, someone out there might
like it. So if you're the kind of person who still wonders how they get
the caramel inside the Caramilk bar, go see this movie, otherwise, you
might just go Oedipus on your eyes.

The Island
Battle in Heaven