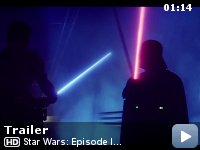 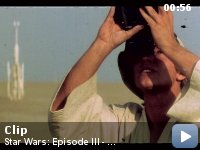 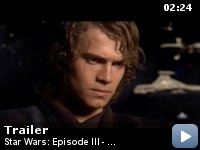 After three years of fighting in the Clone Wars, Anakin Skywalker concludes his journey towards the Dark Side of the Force, putting his friendship with Obi-Wan Kenobi and his marriage at risk.

Storyline
It is three years after the Clone Wars. The leader of the droid army, General Grievous, has captured Chancellor Palpatine on board his ship, the Invisible Hand. Jedi Master Obi-Wan Kenobi and Jedi Knight Anakin Skywalker must fly through Coruscant safely, and enter the Invisible Hand so that they can rescue the captive Chancellor. Just when Palpatine is about to be released, Count Dooku shows up. Obi-Wan and Anakin both battle it out with him, but Obi-Wan ends up unconscious. Anakin slices off his head and kills him. Anakin carries Obi-Wan, and Palpatine follows him. They meet General Grievous face to face, and Anakin tries to fly the last half of the ship so that they can safely land on Coruscant. Later, Palpatine starts acting strange, constantly manipulating Anakin into believing that the Jedi Council is against him. Eventually, it is found out that he is the Dark Lord of the Sith. Jedi Master Mace Windu fights him…

Taglines:
The saga is complete.

Many viewers were surprised the Grievous could be trained in Jedi arts, much less wield a lightsaber. The answer is that when Grievous was constructed, he was given the blood of a Jedi Master, who had a high midi-chlorian count. With this connection to the Force, Grievous had no difficulty learning Jedi ways.

Incorrectly regarded as goofs:
Just after Order 66 is given, the zipper in one of the Wookie costumes (the one on the right hand side of the screen standing behind Yoda) has been said to be visible. In fact, it is merely part of the background peeking through the Wookie's legs.

Anakin Skywalker:
Lock on to him R2.
[R2-D2 responds with more bleeping]

Anakin Skywalker:
Master, General Grievous's ship is directly ahead. The one crawling with Vulture droids.


When I asked the reviewer sitting next to me to sum up Revenge of the
Sith, he simply said "great!" That seemed to basically be the consensus
of virtually everyone in attendance at an advance press screening of
the final chapter in the Star Wars saga.

There was an exuberant mood leaving the theater, as if everyone was in
collective agreement that Lucas had finally done it. That he had gone
out on top, with a stunning, rock-solid coup de grace. And from all the
feedback I've heard from that screening, my sense of that collective
mood was right.

There are no real spoilers in ROTS. Everyone basically knows what
happens in Episode 4: A New Hope. We all know Anakin becomes Vader. We
know Obi Wan lives and we know Luke and Leia are born. What we don't
know is how Lucas weaves those story lines into the large, six-part
opus and better yet, why?

No, it's not a perfect movie. There are those moments that make us
cringe. Bad dialog and High School drama class acting make for a few
awkward moments where you can hear audible moans and giggles in the
audience, but we have come to expect this from modern Star Wars films.
The upside is that these moments are rare in Episode III.

OK, get ready. Take a deep breath. No Jar Jar! Yes, you read that
right. You can let out that deep breath now.

Fortunately, we have one savior to rely on for stellar acting. Mr. Ian
McDiarmid as Supreme Chancellor Palpatine. McDiarmid brings the
elegance of an Alec Guiness back to the franchise in a knockout
performance that leaves the audience riveted and exhausted. He is the
lifeblood of the film.

As someone who saw the original 30 times in it's first month of release
at the age of 13, I currently consider myself a Star Wars moderate. I
don't have volumes of SW merchandise, nor can I debate whether or not
carbonite contains enough oxygen to make it float. All I know is that
magical feeling Star Wars gave me in the original 1977 release and that
I'm happy to say, after a disappointing pair of prequels, has been
finally restored and reinvigorated.

Here's to Mr. Lucas for giving us all something spectacular to remember
for our entire lives that embodies the whole point of going to the
movies in the first place, to escape and lose ourselves in another
world.