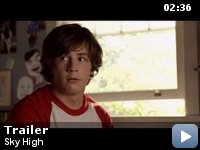 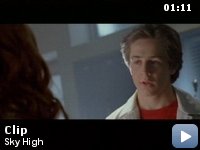 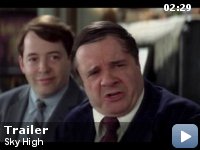 Set in a world where superheroes are commonly known and accepted, young Will Stronghold, the son of the Commander and Jetstream, tries to find a balance between being a normal teenager and an extraordinary being.

Storyline
It all begins when young Will Stronghold, the son of the two famous superheroes: Steve and Josie, A.K.A. the incredibly strong, seemingly invulnerable Commander and and the high-speed flying Jetstream. However, Will does not actually know if he has any powers of his own, and has not told his parents this. He and his best friend, Layla are facing their first day of a secret school in the clouds like none on earth: Sky High, the first and only high school for kids with super-human powers going through crime-fighting puberty. But with no apparent superpowers of his own, however, Will seems destined to grow up a mere sidekick. But as he discovers his true strengths, he'll also learn that it takes loyalty and teamwork to truly become a hero!

Taglines:
Brains, Brawn And Beyond.

According to actors who auditioned for various roles in the production, the main children's parts are to be contracted for not only a sequel but also a possible television series on the cable Disney Channel.

Continuity:
After Medulla says "Let's boogie!" and the group starts to dance, Freeze Girl can be seen dancing in the middle of the group. In the next shot, Freeze Girl is standing next to Warren.

Layla:
What's embarrasing him in front of the entire class going to prove? That is so unfair.

Will Stronghold:
Yeah, well if life were to suddenly get fair, I doubt it would happen in high school.


I got to go see Sky High at a free preview last night. When I saw the
commercials, I wrote this movie off immediately. It looked like a
strictly-for-kids, stupid-but-cute, teeny-bopper funfest. Blech!

I was pleasantly surprised! I love going into a movie like this with
low expectations and being proved wrong. I am a hardcore comics fan
("weenie" I believe the earlier reviewer said) and I still found a lot
to like here.

The movie has a better take on what a superhero world would actually be
like than many "serious" movies. It was almost like a kids version of
the "Astro City" comic book.

The jokes really made Sky High for me! I wont spoil any for you but I
will point out that the cast included Bruce Campbell, Kevin McDonnell,
Dave Foley and Lynda Carter!

If you're a comics fan, go see it! If you've got kids and want to have
a fun evening, go see it!

I am kinda hoping that this becomes Disney's next live-action series.

TagsUSA
The Island
Battle in Heaven