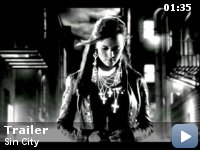 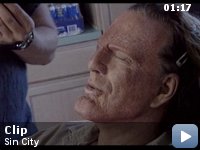 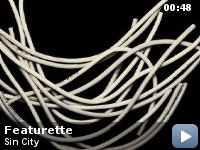 A film that explores the dark and miserable town, Basin City, and tells the story of three different people, all caught up in violent corruption.

Storyline
Four tales of crime adapted from Frank Miller's popular comics, focusing around a muscular brute who's looking for the person responsible for the death of his beloved Goldie, a man fed up with Sin City's corrupt law enforcement who takes the law into his own hands after a horrible mistake, a cop who risks his life to protect a girl from a deformed pedophile, and a hitman looking to make a little cash.

Taglines:
Do I take this cop down and risk it all?

Both Nancy (Jessica Alba) and Wendy (Jaime King) drive cars with the license plates "LEV 311". Frank Miller often puts this in his various stories for "favourite girl" character in that story. The number is a nod to his wife and frequent collaborator Lynn Varley, whose birthday is March 11th.

Continuity:
When Nancy is dancing, she is alternately wearing/not wearing gloves between shots.

The Salesman:
[voiceover]
She shivers in the wind like the last leaf on a dying tree. I let her hear my footsteps. She only goes stiff for a moment.


With Hellboy, Guillermo Del Toro lovingly recreated panels from
artist/creator Mike Mignola's comic book stories and brought them to
vibrant life, setting a new benchmark for adaptations that respect
their source material. With Sin City, however, co-directors Robert
Rodriguez and Frank Miller have done more than just recreate the brutal
chiaroscuro of Miller's stark post-modern noir artwork, they've
captured the essence and the aesthetic of Basin City (as much a
character as Marv or Hartigan) and brought its universe and characters
to a stunning three-dimensional life. And unlike Hellboy, which
suffered from a weak, confusing script, Sin City weaves a Pulp
Fiction-esque narrative which snakes through the dark streets and
crooked alleyways of this hellish metropolis like a fever dream.


In short, Sin City delivers a blistering ballet of bullets and blood,
dames and danger at every turn. It's a kinetic masterpiece of pop
culture for the new millennium (and a case could be made that this was
the movie that CGI was invented for).

As a Frank Miller fan for over 25 years, I know his work and I know Sin
City – and this Sin City will knock your socks off whether you are a
fan or a newcomer to the dark delights of his devilish imagination and
brutal style. Exceeding my expectations on all levels, this movie ranks
as one of the most enjoyable cinema-going experiences I've had in
years.

Everything works here. From Rodriguez's cinematography and editing, to
the seamless direction (no mean feat when you consider Robert
co-directed with Miller and Quentin Tarantino joined the mix as
"Special Guest Director"), to the spot-on casting. The script gives
Bruce Willis, Mickey Rourke, Clive Owen and Benicio Del Toro plenty of
opportunity to chew the scenery – and they do, especially Rourke, who,
despite having his mug buried under a thick layer of gruesome latex,
delivers one of the best performances of his career and steals the show
as Marv, the giant thug with a broken heart. The ladies hold their own,
too. Jessica Alba, Rosario Dawson, Brittany Murphy and Jaime King are
all great in their roles, particularly Dawson as machine gun-wielding
Dominatrix/Hooker-Godmother Gail. And kudos to Elijah Wood (proving
there is life after Hobbits) and Nick Stahl who deliver contrasting
performances as vile villains, the ultra-creepy Kevin and the
disgusting Yellow bastard, respectively.

Sin City is smart, stylish, sexy and sick. It's also violent and funny.
Certainly not a film for the whole family, but for those of us who
enjoy our movies rated R, this flick kicks the head and the gut like a
mule.

Here's hoping Sin City makes a mint, for there are 10,000 stories in
the naked (sinful) city, and this is but a handful of them. I'm already
praying for a sequel.

A picture perfect "ten" for this cineast.