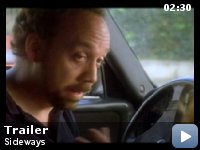 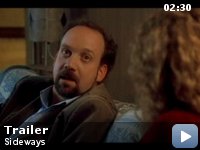 Two men reaching middle age with not much to show but disappointment, embark on a week long road trip through California's wine country, just as one is about to take a trip down the aisle.

Storyline
Miles is a failed writer living a meager existence in San Diego as an English teacher. With his career seemingly fading and the fate of a book hinging on a publisher's decision, Miles is depressed with himself and what he hasn't achieved. Jack is a television actor whom some recognize but not many do, as if he were a minor actor who got a taste of success. With his best friend Miles, the two embark on a road trip through California's wine country. Miles wants to give his friend a nice sendoff before married life, while Jack simply wants to have a fling beforehand. As they're both nearing middle age with not much to show for it, the two will explore the vineyards while ultimately searching for their identities.

During the opening credits, Miles drives west along Sunset Boulevard crossing the 405 freeway, indicating that the Erganians' house is located in the posh L.A. neighborhood of either Brentwood or Pacific Palisades.

Continuity:
When Miles is checking his phone messages from the motel room, the voice instructions tell him to "enter his password and press the pound key". The sequence of digits he presses ends with one of the keys on near the top of the keypad; the pound ("#") key is on the bottom row.


Sideways is a beautiful portrait of mid life disappointment. The
backdrop is lovely California wine country, and the casting is
flawless. Every single performance in this film is surprising, pitch
perfect, and unusual. The movie has the remarkable ability to capture
sadness and desperation in just the light that allows the audience to
recognize the humor. The ending is satisfying but not too pat. In
short, this is the best film of 2004.


The standout performance in the film was Paul Giamatti's. I cannot
believe he was passed over for an Oscar this year. He should have been
nominated for American Splendor, and he definitely should have been
nominated for Sideways. His performance was beautiful, romantic,
heartbreaking and so human. Paul Giamatti, ignore the Academy! Every
year they have less credibility. The people who know films and acting
at all know that you are one in a handful of truly great actors working
in Hollywood today.