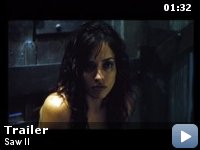 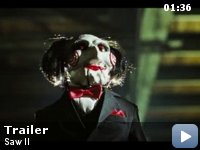 Jigsaw locks a few unlucky people in a booby trapped shelter and they must find a way out before they inhale too much of a lethal nerve gas and die. But they must watch out, for the traps Jigsaw has set in the shelter lead to death also.

Storyline
When detective Eric Matthews is called to a crime scene of a victim of Jigsaw, he finds a lead to the place where he is hidden. Once there, he realizes that Jigsaw trapped his son Daniel Matthews with three women and four men in a shelter, and they are inhaling a lethal nerve gas. If they do not use an antidote within two hours, they will die. Eric follows with increasing desperation the death of each member of the group in monitors, while trying to convince Jigsaw to release his son.

Taglines:
Oh, yes. There will be blood.

The advertising posters for the film had to be recalled on orders from the MPAA because the two severed fingers forming the "II" in the posters did not meet guidelines for film advertising. The new poster makes it more obscure. Also, posters had listed the film as being rated R when at the time the film still hadn't gone before the MPAA for a rating.

Continuity:
When Xavier opens the door to the Syringe Pit, it shows a very short clip showing the timer on the door for the antidote. If you slow the clip down, you will see that the timer shows '4:00', in the next scene it shows '2:58'.

John:
You all possess the combination to the safe. Think hard. The numbers are in the back of your minds. The clue to their order can be found over the rainbow.


Saw II follows on the heels of Saw, as another taught, tense thriller.
The mark of a great thriller/shocker/horror movie is the number of
twists and turns, and this is what identifies Saw II as one of the
better members of its genre.

Few movies keep me on the edge of my seat. This was one of them. There
was no one dozing off during this flick. And the number of folks who
walked out to take/make cell phone calls was the lowest I've ever seen.

Like Saw, this sequel is more than a little bloody in some places, but
that's to be understood. It was never promoted as a walk in the park.
If you're in the mood for a thriller that will keep you on the edge of
your seat, this is worth a try.

And this movie left more than a few folks in the audience waiting for
another sequel.