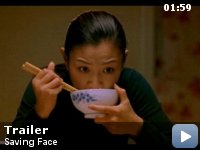 A Chinese-American lesbian and her traditionalist mother are reluctant to go public with secret loves that clash against cultural expectations.

Storyline
In Manhattan, the brilliant Chinese-American lesbian surgeon Wil is surprised by the arrival of her forty-eight year old widow mother to her apartment. Ma was banished from Flushing, Queens, when her father discovered that she was pregnant. The presence of Ma affects the personal life of Wil, who is in love with the daughter of her boss at the hospital, the dancer Vivian Shing. Once her grandfather has promised that her mother would only return to Flushing remarried or proving that it was an immaculate conception, Wil tries to find a Chinese bachelor to marry Ma.

Taglines:
It is never too late to fall in love for the first time.

The picture of Vivian as a child in Dr. Shing's office is actually a photograph of Joan Chen's daughter.

Continuity:
Wil consistently wears her hair in a tightly pulled back ponytail, but shortly after her mother moves in she goes to visit her grandfather wearing an army T shirt. While she's adjusting the TV antenna, her hair is uncharacteristically puffed up with no explanation. All scenes before and after show her hair in the tight ponytail. Quite a bit later, there is a scene where Wil's mom sends her to the beauty shop to find out gossip. It's there that Wil is wearing the same army T shirt and getting her hair rolled up in big curls – the end result of which would be puffed hair!

Vivian Shing:
How about this one? It's packed with peanuts

Wil:
and alot of other satisfying carcinogens.

Vivian Shing:
Sometimes your body knows what you really want


I just saw this at Sundance. Alice Wu is a first-time director, yet
this is one of the best movies I have seen in some time. It is funny,
yet tells a beautiful and complex story about communication, traditions
and love. It did not look like a low budget independent film at all.
The acting, cinematography and music were all beautifully done. One
could tell this was an important story to all those involved and that
they worked very hard to get it to the final product. The characters
are not stereotypes but honest portrayals of Chinese Americans dealing
with older traditions in modern America. We are all immigrants, we are
all human and make mistakes while struggling for acceptance in society.
Sometimes it is what we don't say that effects our lives most.