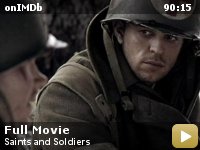 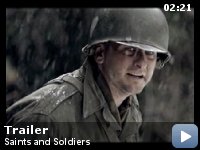 Four American soldiers and one Brit fighting in Europe during World War II struggle to return to Allied territory after being separated from U.S. forces during the historic Malmedy Massacre.

Storyline
After surviving a massacre in Malmedy, a location behind the German army in Europe, four American soldiers with only one weapon rescue the British pilot Oberon Winley (Kirby Heyborn) in a tree and they move together, trying to reach the allied forces and save a great number of allied soldiers from a German attack with the information got by Winley in his flight. While marching, each soldier discloses inner secrets to the rest of the group.

Taglines:
Trapped behind enemy lines. All they have is their hope.

All guns used in the film are authentic and fully-functional, modified to shoot blanks.

Anachronisms:
Early on, before the Malmedy massacre (which took place in December 1944), a German solder relieves Kendrick of two packs of Lucky Strikes in green packaging. In reality, Lucky Strikes switched to white packaging in 1942, alleging that the green dyes were needed for the war effort. Oberon, the British flier, correctly carries a white pack of Lucky Strikes.

Outstanding in every sense


My wife and I go out to see a movie every Friday night. Some nights,
I'll tell you, the Picken's Is Slim, as they were when we saw this film
about six months ago (if memory serves). I'd never heard of it. She
didn't want to see any more war films since that miserable, over-hyped
"Pearl Harbor" with the lame love story thrown into the mix. (Cuba
Gooding was the only good part in the movie, and, shock! His
character's part really happened, too! Hollywood take note!) To tell
you the truth, we nearly went to rent something to watch at home, but
as we left, we heard a guy in line talking excitedly about how he'd
seen it three times, and loved it. What the heck. We got back in line.
Their popcorn is better than ours. We went in, not expecting much of
anything.


I'll tell you, we were blown away. I came on this site tonight because
I've been meaning to write and tell everybody to go see this little
film that only ran a week in our local theater. (Buy the DVD!) I have
read every comment on this site, and have to LOL at the comments about
Mormons. What Mormons? I never even knew it was Mormons until I read it
tonight on this site! And so what? It happened to a Mormon guy. It was
his story. You expect Catholics to tell it? The other complaints about
the story being predictable…what? It sure got us! It was a true
story. Don't you get it? If it's true, you can't change what really
happened–and what happened was humanity showing it's face. It was
right winning out over allegiance.

I'm looking forward to the DVD coming out. I'm getting it and showing
it to all my friends. This is film-making the way it should be done. We
want to see it more of it.