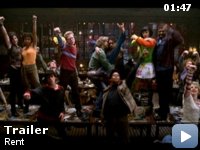 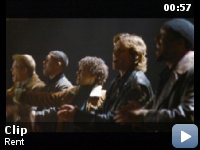 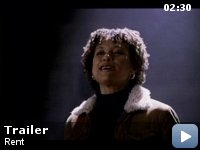 This is the film version of the Pulitzer and Tony Award winning musical about Bohemians in the East Village of New York City struggling with life, love and AIDS, and the impacts they have on America.

Storyline
This rock opera tells the story of one year in the life of a group of bohemians struggling in modern day East Village New York. The story centers around Mark and Roger, two roommates. While a former tragedy has made Roger numb to life, Mark tries to capture it through his attempts to make a film. In the year that follows, the group deals with love, loss, AIDS, and modern day life in one truly powerful story.

Less than a year before RENT opened in theaters, Tracie Thoms made a guest appearance on the TV show
Law & Order, where Jesse L. Martin starred as Det. Ed Green. In an interview about filming the episode, Tracie stated, "I'm like, 'Hey Jesse, it looks like we're gonna be spending a lot of time together.' And he's like, 'We are?' I'm like, 'Yeah. I'm Joanne.' (imitates Jesse gasping) 'ACTION!'"


Please forgive the cheesy opener. I know that "Rent" hasn't started off
with the best press in the world. Some questioning Chris Columbus'
direction, some questioning the actors, some questioning the film in
general. All I can say, however, is wow! I must admit that I was
extremely skeptical about the entire project, and that I'm not a
"rent-head", and this wasn't one of the movies on my wish list to see,
but it satisfied me plenty. First off, lets talk story: most know the
story, the one of eight East Villagers struggling with everyday life,
with a few extremes. Just problems like money issues, drug addiction,
and AIDS! A story that could easily be drove full speed into cliché
heaven, but doesn't. It makes you feel the ups and downs of these
characters. And how they convey all this not only through dialogue, but
through song as well. Which brings me to my next point: the music.
Being a theater major, I have heard the original cast album quite a few
times, and not that it was bad, its just the movie music has this "pop"
to it that vibrates your eardrums and your heart in the best ways. And
like I said, no disrespect to the original. My final point centers
around what many are saying will destroy any chances of this movie
entering the Oscar race: the direction. Well, sorry to disappoint the
Columbus skeptics out there who think he should stick to "Home Alone's"
and "Harry Potter's", but he captured exactly what this movie was
about. The grittiness, the hardships, life, love, NEW YORK! He gives
the movie realistic credibility, which is always hard to accomplish
with musicals (i.e. – people breaking into song and dance on the
subway). These people sing, and it makes you think no differently of
life. And to touch up on one more thing, the acting, what can you say?
This cast overcame unbelievable obstacles to make this work, and they
did just that. Anthony Rapp does an amazing job in leading this cast.
"La Vie Boheme" hasn't left my mind since I left the theater. Adam
Pascal and Rosario Dawson are such a couple to watch. Such chemistry
between the two. Their developing relationship throughout the movie
makes you laugh, cry, and, well, cry a little more. Another scream of a
relationship was Idina Menzel and Tracie Thoms as Joanne and Maureen.
Talk about an unlikely couple! Somehow, though, they make it work oh so
well. Taye Diggs is gold, as usual, as the roommate turned landlord to
Mark and Roger. The two that really caught my eye, though. The
performances that will go in my photographic movie character memory in
a very special spot are Angel and Collins (aka Jesse L. Martin and
Wilson Jermaine Heredia). Two guys I have yet to see on film (exception
with Martin on "Law and Order") brought to the movie what this movie
was about the most, and that is love. "I'll Cover You", sung by the
duo, will melt your heart in a second.


In conclusion, all I can say is just give this movie a chance. Don't
just go off the negative buzz, because this truly is a beautiful movie.
A movie that will have you appreciating your life more and more by the
second. The movie that will take you on the emotional roller coaster of
life. See the Holiday movie of the year.

"No Day but Today"