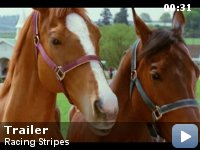 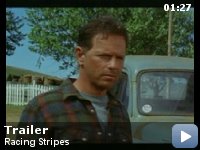 An abandoned zebra (voice of Frankie Muniz) grows up believing he is a racehorse, and, with the help of his barnyard friends and a teenage girl (Hayden Panettiere), sets out to achieve his dream of racing with thoroughbreds.

Storyline
In the middle of a raging thunderstorm, a traveling circus accidentally leaves behind some very precious cargo–a baby zebra. The gangly little foal is rescued by horse farmer Nolan Walsh, who takes him home to his young daughter Channing. Once a champion thoroughbred trainer, Walsh has given up horse training for a quiet life with Channing on their modest Kentucky farm. The little zebra, or "Stripes," as Channing calls him, is soon introduced to the farm's misfit troupe of barnyard residents, led by a cranky Shetland Pony named Tucker and Franny, a wise old goat who keeps the family in line. The group is joined by Goose, a deranged big-city pelican who's hiding out in the sticks until the heat dies down in Jersey. The un-aptly named bloodhound Lightening keeps a lazy eye on goings-on at the farm – in between naps. The Walsh farm borders the Turfway Racetrack, where highly skilled thoroughbreds compete for horse racing's top honor…

Taglines:
A tail for the whole family.

The Shetland pony, Tucker (Dustin Hoffman), had to be painted brown during filming because his real coat turned gray. Everyone was so surprised, but the animal trainers did a little touch-up with brown dye.

Goose:
You ever try swimming in cement horseshoes.


Yes, it's stereotypical, and no, it doesn't reach or even approach the
experience of Babe, but it is a fun flick, and one I feel is worth a
matinée ticket if you're at all intrigued. I have to give kudos to the
filmmakers for using real zebra sounds and vocalizations for Stripes;
little details like that can make or break a talking animal film for
the viewers who actually know a bit about the animals featured in a
film…and hey, is it really too much to ask for a zebra to make zebra
noises? There is some amount of potty humor, especially concerning the
flies and the Jersey gangster pelican Goose, but it wasn't as much as I
had assumed from earlier reviews.

There certainly are better movies out there, but the kids will enjoy
this one, and the kid in me did. It was predictable, but comfortingly
so, and sometimes it's nice to just sit back, suspend disbelief, and
have a non-taxing movie experience where talking, wisecracking animals
deliver lessons in life, like how being different isn't a bad thing,
real winners are those with the heart to try, and success is often due
to the support of those around you. And I do have to admit that one
scene near the end brought tears to my eyes, much to my own surprise.