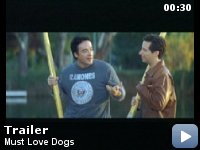 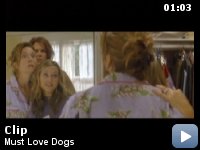 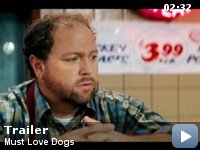 A forty-something preschool teacher looks to the personals for a change of pace and a relationship, with hilarious results.

Storyline
Sarah Nolan, a recently divorced thirty-something year old, has a family that just can't help getting involved in her personal life, or lack there of. After her sister puts her profile on PerfectMatch.com, this preschool teacher goes on a number of outrageous and hilarious dates. But will she be able to find the one, who must love dogs?

Taglines:
The hardest trick is making them stay.

According to director Gary David Goldberg, he gave the script to John Cusack and encouraged him to change any of his character's dialogue to better suit him. Goldberg was surprised by Cusack's response, who later sent the director about 35 pages of new dialogue for his character.

Continuity:
When Sarah runs out of the shop where she's having a manicure, she has flip flops on and toe separators on her feet. After she talks to Jake and turns around to go back to finish her manicure, the separators are gone.

Rebecca:
The best place to meet a guy is at the supermarket. You don't need to waste a lot of time there, either. You see a guy holding a list, you know he's married. He's in the frozen food section carrying a small basket, he's single. I like to hang out by fruits and vegetables, there's a better chance of getting a guy who's healthy.


This movie had all the ingredients necessary to be one of those
romantic comedies that are also 'good' films. The cast is competent,
the actors all likable. But unfortunately, the writing is sub par. It
is almost embarrassing to watch Diane Lane (or any of the actresses
playing her sisters) recite lines like '…boob shirt? Boob shirt?…I
don't have any boob shirts..' or '…that is disturbing on so many
levels…' and other trite and trendy phrases. While John Cusack
escapes most of the embarrassment (he has the best lines, and the best
performance), it is still a film beneath him.


The movie has too many false moments in it to be entirely enjoyed – the
obligatory gay friend Diane has, and of course his drop dead gorgeous
model-like boyfriend; the large Irish family that seems to drop their
accents from scene to scene; the trailer-park girlfriend; Diane's scene
where she just shows up at Cusack's home (how did she know where to go,
and what was her hurry?); and of course the 'chase' scene at the end
where of course she had to bring her dog. And for that matter, it
wasn't even her dog so even the title does not entirely make sense.

It's a shame, because like I said, the cast is likable. Just goes to
show you that without the right screenwriter, even strong players can
come across as high school acting students.

TagsUSA
The Island
Battle in Heaven