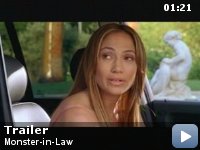 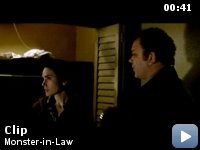 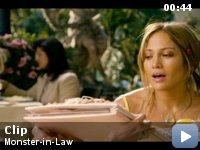 The love life of Charlotte is reduced to an endless string of disastrous blind dates, until she meets the perfect man, Kevin. Unfortunately, his merciless mother will do anything to destroy their relationship.

Storyline
After years of looking for Mr. Right, Charlotte 'Charlie' Cantilini finally finds the man of her dreams, Kevin Fields, only to discover that his mother, Viola, is the woman of her nightmares. A recently fired news anchor who is afraid she will lose her son the way she has just lost her career, Viola determines to scare off her son's new fiancé by becoming the world's worst mother-in-law. While Viola's long-time assistant Ruby does her best to help Viola execute her crazy schemes, Charlie decides to fight back and the gloves come off as the two women battle it out to see just who is the alpha-female.

Taglines:
She met the perfect man. Then she met his mother.

Shari Wacks designed the jewelry for the film.

Continuity:
When Charlie is at Kevin's house for the party they think is a barbecue she only has a hand bag, but after she sees Kevin with Fiona and goes to leave she is seen packing a suit case.

[Charlie sitting at her desk at home. Phone rings. Charlie lets the answering machine pick up and listens to the recording]

[Remy walks in with cup of coffee and toast]

The Fabulous Jane Fonda And The Dog Walker


Everyone I know went to see "Monster In Law" for Jane Fonda and in
spite of J Lo. If you go with that spirit, you just may have a
reasonable good time. I hadn't realized how much I missed Jane Fonda
and how wonderful she is, she was she will always be. The film in
itself is just too terrible for words. A showdown between a possessive
mother and a dog walker. The script is unbelievable bad and the
aforementioned Jennifer Lopez is, poor thing, atrocious. She has the
lightness of an elephant and the charm of a blank page but, look at the
billing…Jennifer Lopez right on top, above Jane Fonda. Ridiculous
isn't it? But that's what, I imagine, marketing people decide. What a
shame. If I had been Miss Lopez, I would have used my power to demand
that Jane Fonda's name should appear above mine. I know, I live in a
fantasy world of respect and, if nothing else, good manners. The film
may turn out to be useful as a teaching tool. To show both actresses
together for a how to and how not to. I'm sure Jennifer Lopez must have
been told by someone that she has to cultivate her craft. Her voice,
goodness! A jarring, shrilling clash of tonsils and nasal sounds. Too
late to play cute, virginal girls. A dog walker indeed!