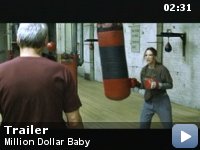 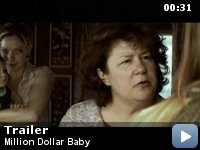 A hardened trainer/manager works with a determined woman in her attempt to establish herself as a boxer.

Storyline
Frankie Dunn has trained and managed some incredible fighters during a lifetime spent in the ring. The most important lesson he teaches his boxers is the one that rules life: above all, always protect yourself. In the wake of a painful estrangement from his daughter, Frankie has been unwilling to let himself get close to anyone for a very long time. His only friend, Scrap, an ex-boxer who looks after Frankie's gym, knows that beneath his gruff exterior is a man who has been seeking, for the past 25 years, the forgiveness that somehow continues to elude him. Then Maggie Fitzgerald walks into his gym…

Ashley Judd was also considered for the part of Maggie.

Crew or equipment visible:
When Frankie introduces Maggie to one of the managers at the gym, movie lights can be seen reflected in the sunglasses hanging on his shirt.

Eddie Scrap-Iron Dupris:
[Narrating]
Only ever met one man I wouldn't wanna fight. When I met him he was already the best cut man in the business. Started training and managing in the sixties, but never lost his gift.

A movie that will last

"Million Dollar Baby" has great characters, but it doesn't glorify
them. It has a wonderful story, but it never tries to impress you. The
photography, score and direction is superb, but never distracting. What
this movie is, if I have to call it something, is passion. Passion for
film-making, passion for storytelling, passion for its characters,
passion for its actors, and passion for its story and the means at
which it will go to tell it. Amazing.


Frankie Dunn (Clint Eastwood) owns a messy boxing gym which is
populated, mostly, by downbeat losers who he spends some time training.
He runs it with his friend and former student Eddie Scrap-Iron Dupris
(Morgan Freeman), who now lives contently at a room in the gym. One day
a young woman named Maggie (Hilary Swank) walks in, looking for a
manager and trainer. Frankie shafts her immediately ("girly, tough
ain't enough"). Frankie has bigger things on his hands. He's managing a
fighter who has a shot at a title bout.

But Frankie is old and weathered and not an appealing manager, so the
fighter leaves him. Frankie is broken by this; it is another in a long
line of rejections and separations. We can tell that, at this time in
his life, he only gets really close with those he's training (Scrap is
the only exception). We can tell that his loneliness – and a bit of
persuasion from Scrap – cause him to agree to teach Maggie. Teach, that
is the agreement, not manage. But, by the end of the film he will have
devoted his life to her.

So the rest of the story follows these two people. There is no real
'plot' that you could describe in a trailer because it is constantly
changing…it is not the inspiring underdog story you may think of it as.
No, what it's 'about' is these characters, and how they react to the
circumstances around them, which change with each scene.

Narrating the story is Scrap, speaking like he's looking back to a time
long ago when everything has passed. His voice seems flat, deadpan, but
there is a working of subtle sorrow in it. Scrap is a sad human being,
he sees himself as the result of missed opportunities in the past, and
so he spends his time helping the others, offering them his wise
advice, with a tone of deadpan humor and even cockiness. Scrap knows
what should be done, and what will happen regardless, and he is sort of
okay with everything, in a sort of passive way. But the man also knows
what's right and he has a deep, inner strength which is displayed in
one scene in particular where you just have to cheer. It is an
intriguing character, and personally I think it's Freeman's best
performance.

And Eastwood's best too. He is an elderly man; some might say too
elderly to still be working. After all, most people are retired by his
age. But if you had to guess when you're watching this film, you would
never, ever say the man is seventy-four. You would say something closer
to the sixties, because the man has such amazing energy and dedication,
and above all, he has talent. It's been forty long years since "A Fist
Full of Dollars" and film has come a long way, and so has this man. At
seventy-four, passed all those years as an action hero, nearing what's
could be the end of his career, Eastwood has made his best movie. I
really, really hope he has time to make many more.

As for Swank, well, she must have found something big that she shared
with her character, because this is not acting, it is existing. Swank
is Maggie. That's all there is too it. This could be the movie she will
be remembered for.

So, "Million Dollar Baby" is a masterpiece. I saw it last night when it
opened in my city, and everyone else was seeing "White Noise", and I
was shaking my head. Everyone who is even remotely interested in movies
should see this one, just so they can know how movies are supposed to
be made. I'm trying to think, and there is not a single thing here
where Eastwood went wrong. The acting, directing, writing, score,
cinematography…they all accomplish precisely what they're supposed to
with sublime perfection. Many of these aspects will certainly receive
Oscars and all of them should.

You may cry through this film, you may cheer. Whatever the case, you
will love it.