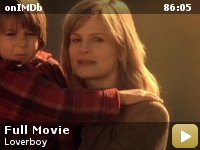 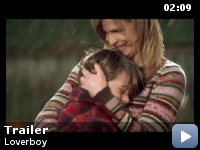 A neglected daughter becomes a possessive mother in an emotional journey into the heart and mind of a woman who loved too much.

Storyline
Emily tells her son Paul, now six years old, the story of his life – how she sought motherhood, to be a mom without a husband, to raise a perfect, exceptional child, whom she calls Loverboy. In flashbacks told around a pretend car trip they take – so he can practice driving – we see Paul's infancy, their fun together (sometimes with a manic edge), and his growing desire to go to school and be with other kids. We also flash back to Emily's childhood, with parents so bound up with each other that she's virtually ignored. Is Emily going to be able to let Paul be with others? Or, can she, as in the David Bowie song she sings at a school talent show, construct a life on Mars?

Taglines:
Some mothers aren't meant to be moms.

Emily:
Fitting in with the outside world, respectability, suitability, conformity, were never high on my priority list; neither was normalcy. I admit: I cultivated arrogance. The world would be our school; I wanted to learn it and teach it to you.


Kevin Bacon directs this bizarre story adapted by Hannah Shakespeare
from Victoria Redel's novel about maternal obsession providing his wife
Kyra Sedgwick with a role to spotlight just how fine an actress she
truly is. The story is disturbing but vitally interesting. There are
problems with the film, the most annoying one being that the dialogue
is practically inaudible due to the miking and, more so, due to the
musical score which covers all the lines to the point of making the
movie seem like a silent movie with music from the pit! Such a shame,
because it SEEMS like this is a good script with a lot to say.

Emily (Kyra Sedgwick) is damaged goods, a woman neglected as a child
who is determined to have a baby and raise it on her own, lavishing the
child with all the affection and attention she desperately missed.
After numerous attempts to get pregnant from any available man, she
finally succeeds impregnation with Campbell Scott and gives birth to
Paul (Dominic Scott Kay) who becomes her entire reason for living. She
sequesters Paul form the world, gives him everything a child could want
– except association with peers. Her obsession grows to the point of
mental illness and the results are devastating. Along the way Emily and
Paul encounter people who seek to intervene in their lives: these
people are played with great style by cameo roles of Sandra Bullock,
Oliver Platt, Kevin Bacon, Marisa Tomei, Matt Dillon, Blair Brown and
even some of the Bacon's own children! It is a star cast obviously
committed to Kevin Bacon's vision of this star vehicle for Sedgwick.

The pacing, cinematography, and acting are all first rate. If only the
ugly and senseless music hadn't submerged the dialogue (oddly enough
the score was written by Michael Bacon!), this would be an Oscar
contender.