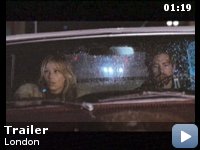 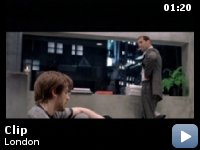 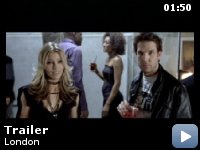 London is a drug laden adventure that centers on a party in a New York loft where a young man is trying to win back his ex-girlfriend.

Storyline
In New York, the drug-addicted Syd is consumed by drink and drugs – missing his girlfriend London, who broke up with him six months ago after a two-year relationship. When Syd finds that London's friends throw a going away party for her, he decides to go to the party without an invitation. But first he meets the banker and drug-dealer, Bateman, in a bar to buy coke, and he invites his new acquaintance to go to the party with him. While locked in the bathroom with Bateman snorting coke and drinking booze, Syd recalls moments of his relationship with London, inclusive that he had never said "I love you" to his girlfriend despite her countless requests. Bateman also "open his heart" under the influence of cocaine and tells his impotence problem to Syd; in the end he convinces Syd to talk to London.

Dane Cook, the actor that plays George, actually uses some of the lines from his stand up comedy show in the film.

Syd:
Can I ask you something?

Syd:
Do you love him?

London:
I never that I was in love with him.

London:
Syd? Its gonna be a really really long time before, you know, I fall in love with anybody the way that I was in love with you.


Directed by newcomer Hunter Richards, London is a complex tale of a man
scorned by a traumatic breakup. Jessica Biel plays the title character,
a savvy sophisticated woman who was the love of Syd's (Chris Evans)
life. Since she left him, he has become a complete wreck. He now spends
his days drinking and snorting cocaine. Six months later, he finds out
through a random phone call that London is moving to Los Angeles. The
worst part is that her friend Becca (Isla Fisher) is throwing a going
away party – one that he isn't invited to. Determined to get London
back, Syd decides to crash the party along with his unsuspecting dealer
Bateman (Jason Statham), a banker who sells drugs on the side. When
they get there, they eventually wind up in the bathroom. They snort
huge amounts of coke and talk about life and love as Syd attempts to
get up his nerve and talk to London. Along the way we are introduced to
a number of eccentric characters, such as feisty bartender Mallory (Joy
Bryant) and high-school student Maya (Kelli Garner). Each one plays a
part in Syd's tripped-out journey of self discovery.

Although it features a cast full of popular young stars, London is not
an easy sell in the slightest.. Audiences aren't likely to respond due
to its strange and offbeat plot. It reminds me a lot of 1999's Go in
this regard, although it is considerably less mainstream. It is truly a
character study of many different individuals, all of them reflecting
on life as the events unfold before their eyes. It moves at a slow pace
but is never boring thanks to excellent performances and stylish
direction.

Chris Evans is on screen for almost every frame and delivers another
excellent performance. He shows his dramatic chops here and exhibits an
ability for both comedy and drama. His character is very complex and
has many different layers, all of which are revealed throughout the
course of the film. Jason Statham, well-known for his action roles,
plays against type here as the straight laced businessman Bateman. He
shows his talent in both comedy and drama, and also has great chemistry
with Evans. Jessica Biel is radiant and fascinating as London, a woman
longing for complete commitment in an otherwise stable relationship.
She has strong chemistry with real-life boyfriend Evans and her
character is believable and likable. Most of her scenes are flashback
sequences, so it is interesting to watch her character progress.

The supporting cast is great for a film of this size. Joy Bryant is
solid as Mallory and gets the most to do of the side characters. Kelli
Garner makes an impression but isn't given a whole lot to do, maybe
appearing for fifteen minutes total. Isla Fisher, who was hilarious in
last year's Wedding Crashers, gives another strong comedic performance
here as the naive and unsuspecting party host. The rest of the actors
are fairly insignificant overall, with most being reduced to mere
walk-on roles (such as comedian Dane Cook).

Richards writes and directs this project and shows great promise in his
first outing. The direction is stylish and he finds many interesting
takes to use – making the film easy to watch and helping it from
dragging on. The screenplay is also solid. It seems like something
originally written for the stage, but it works on film thanks to the
way each scene is handled. While there are comedic elements, there are
also several sweet and poignant scenes. The best scene in the film is
the final confrontation between London and Syd in an airport. The
Crystal Method provides the score for the film, a techno-fringed
mixture of various beats that fits well with the tone of the film.

Overall, I can see why London isn't appreciated by critics and won't be
embraced by audiences. It's a strange film that requires patience from
the viewer due to its slow pace. But thanks to excellent performances
and stylish direction, it turns out to be a completely fascinating and
involving tale.