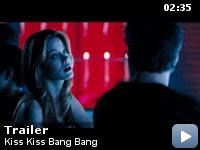 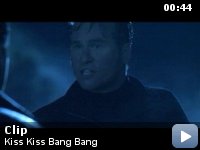 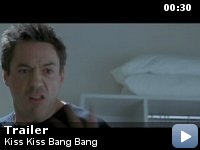 A murder mystery brings together a private eye, a struggling actress, and a thief masquerading as an actor.

Shane Black had been suffering from writer's block; it ultimately took him over a year and a half to write the script for
Kiss Kiss Bang Bang. He then had enormous trouble trying to sell it. His former cachet as being the highest paid screenwriter meant nothing when he was touting around his screenplay. Eventually he took it to Joel Silver who gave him his first break back in 1987 when he bought
Lethal Weapon.

Errors in geography:
During the climactic chase, the van turns the corner from Ocean Avenue onto Queens Way in Long Beach three times and passes 444 E. Ocean Avenue four times.

Harry:
[voiceover]
I was wetter than Drew Barrymore at a grunge club.


Directed and co-written by Shane Black; based on a novel, "Bodies Are
Where You Find Them" written by Brett Halliday; and starring Robert
Downey Jnr, Val Kilmer and Michelle Monaghan.

A terrific opening credit sequence easily sets up the audacity and
chagrin of the film for an appreciative audience. In essence, these are
the reasons why you need to see this movie: the razor sharp wit,
shockingly fast-paced and hysterical dialogue, pulp-fiction-esquire
vibe, its pure cheesiness and the cynicism of a beat up old paperback
detective novel.

Got you yet? Alright, maybe an explanation of the seemingly simple plot
is warranted. It begins with a ridiculously funny set up resulting in
Downey's character being paired up with Kilmer to observe the latter in
his job as a private detective. They hook up with a down-on-her luck
actress who brings a case for the sleuths. This synopsis constitutes
gross misrepresentation on my part as things get remarkably complex.
How so? Well, even the lead the character (who also is purposefully
pathetic as narrator) takes time out within the movie to remember where
he is in telling the story. There are even snippets of dialogue where
the characters attempt to fill in the gaps or actually remind
themselves of what has happened thus far in the movie.

Downey, Kilmer and Monaghan are all caricatures drawn from popular
references of literature, movies and art. All however, are larger than
life, exhibit great chemistry and for a movie buff, it is heaven to
witness the self referential exercises and hear the narrator shred
every narrating convention applicable. Downey's performance is
remarkable (neurotic, comic, vulnerable and charming). I have never
seen Kilmer in such a well-defined, uproarious piece of work. Monaghan
is also integral to the trio and shines exuding a brash, fighting and
sexy appeal. She brought back fond memories of early Kathleen Turner
and Rene Russo. The fact that her look screams Renee Zellweger, is not
a bad thing either.

Black became famous in the 1980s for writing the hit buddy movies:
Lethal Weapon, The Last Boy Scout and The Long Kiss Goodnight. As a
first time director, he does well keeping the frenetic pace and
allowing the audience to catch up only to get lost time and time again.
The style is so disarmingly effective, that at times I shook my head in
confusion or found my hands against my mouth, agape in shock. I also
think that in creating such a brilliant script that Black may have
blacklisted himself in Hollywood for mirroring its supposed fame and
glamor and exposing its not too pretty side. His one-liners and
connected sub-plots are not typical and Kilmer and Downey make magic
with their banter and clinical delivery.

All the ingredients of a pulp-noir novella can be found, even employing
a structure of chapter-type headings within the movie. Parallel story
lines unfold and given plot assumptions are turned over, always with
achingly funny results. Even the clichés are clever e.g. a tough guy
predictably crashes through a glass table, or body after body turns up,
to haunt the characters.

I strongly recommend the movie, given the talent of Downey and Kilmer.
Downey should be honored with a Lead Actor Oscar nomination; while
Kilmer deserves a Supporting Actor nod. It thrilled me to see them both
in their element, as I was on the verge of disavowing them as
marquee/box-office draws. The screenplay should also attract Oscar
consideration.

One of the year's best films and one of those rare movies where you'll
consistently find something new to laugh at, when viewed each of a
dozen times.