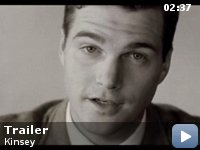 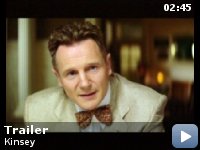 A look at the life of Alfred Kinsey (Neeson), a pioneer in the area of human sexuality research, whose 1948 publication "Sexual Behavior in the Human Male" was one of the first recorded works that saw science address sexual behavior.

Storyline
Called Prok as an adult (short for Professor Kinsey),

Despite containing relatively few depictions of sexual behavior, the MPAA gave the movie the R rating for all the conversations about sex and verbal descriptions of sexual acts. However, according to director Bill Condon, the MPAA members thanked him afterwards, because they had found the movie very educational nevertheless.

Audio/visual unsynchronized:
About 25 minutes into film someone plays 'Frederic Chopin' Etude #1 in A flat. The notes do not match what is being played. Only part of the keyboard is seen but the right hand seems to be playing an octave lower than the notes.

Clyde Martin:
Sex is a risky game, because if you're not careful, it will cut you wide open.


"We've got a couple of hours before dinner; time for a couple of sex
surveys. Who wants to go first?"

This line from KINSEY is a great representation of the movie. It
illustrates the film's offhanded sense of humor and shows that the
otherwise taboo topic of sex is tossed about in a way that can be seen
as being either casually shocking or mundanely trivial. And, logically
enough, numerous scenes do happen at the dining table: sex researcher
Alfred Kinsey, as played by Liam Neeson, chatters about sexual
statistics over family backyard cookouts with his teenaged children,
regales guests with graphic details of sexual minutiae at elegant
affairs and ultimately ends up becoming a crashing bore at dinner
parties as his compulsion to ramble on about all things sexual
dominates his every conversation and waking thought.

What begins as a healthy interest and a professional curiosity becomes
a tiresome obsession. In a way, Kinsey becomes a sex addict, but in a
scholarly, detached sort of way. He's like a sports nut who's neither a
player nor a spectator, but loves to collect the memorabilia and
obsessively keep track of trivial statistics. He measures his sexual
conquests less by the number of his bed partners than by how many
people he seduces into answering his probing sex surveys. Research
itself becomes a sexual fetish.

A disturbing, or at least revealing, aspect of the film is the
implication that Kinsey seemed to blur the line separating the personal
and professional in his pursuit of carnal knowledge. There is a scene
where Kinsey and his assistant Clyde Martin (Peter Sarsgaard) go to a
gay bar to round up people to interview and various men treat his
request to answer questions as a joke, assuming that the survey is
really a cheesy come on. And they might not be entirely wrong. Watching
the film, one gets the feeling that Kinsey had a substantial sexual
appetite, both physically and intellectually. The film suggests more
than it reveals, but it hints that the lingering concerns over Kinsey's
moral and ethical behavior might reflect more than just a germ of
suspicion.

Though the film tries to memorialize Kinsey as a social pioneer, it
doesn't shy away from (nor does it condemn) his dubious breaches of
ethical standards, such as encouraging intramural sexual activities
among his staff and their wives. At one point, Kinsey interviews a
creepy subject played by William Sadler who has maintained a detailed
record of all of the thousands of people he has had sex with (including
children) and the implication is clear that he and Kinsey are two sides
of the same coin — both justifying their amoral pursuits in the name
of intellectual enrichment.

Throughout the movie all things sexual are treated comically and
seriously, trivially and ponderously, casually and obsessively. But
only fleetingly is sex treated erotically. The film is graphic about
sex, but in a textbook sort of way, not a pornographic way. Even the
few sexual scenes involving Kinsey and his wife (Laura Linney) seem
designed to illustrate an academic point, coming off as being more like
classroom visual aids rather than moments of passion. The film delves
into the good doctor's bisexuality, but gingerly treats it with equal
reticence. Indeed, though a bit of full frontal nudity is supplied by
Sarsgaard, he ends up putting his pajamas on before sharing an intimate
kiss with Neeson. Perhaps the film's only moment of real sexual tension
comes from two Boy Scouts discussing the sins of self gratification.
(And they end up praying!)

The film is mostly all X-rated talk, with only a bit of PG-13 action.
And the talk isn't even all that graphic, it just seems that way
compared to the traditional — skittish — way films always approach
the subject. If the film has any point it is that even though we have
come a long way in dealing with sexuality, we still haven't gone all
that far: political correctness having joined religious piety as a form
of censorship. Kinsey worked to bring the most private of all human
endeavors into public discourse, not realizing, or caring, that most
people would still rather have it continue being — literally —
private intercourse. As such, KINSEY still carries a certain shock
value and the ability to milk much of its humor from its often
embarrassingly blunt approach.

And humor may be the film's saving grace. Though, towards the end, the
story takes on the usual air of self-importance that plagues most film
biographies, writer-director Bill Condon refuses to let the film become
too heavy-handed. Some of the humor is a bit obvious, such as picking
John Lithgow to play Kinsey's pompous father, a fundamentalist
preacher, in a performance that echoes the actor's similar role in
FOOTLOOSE. But, for the most part the humor humanize the characters and
doesn't present them as crusading icons or symbols of enlightenment.
Like most film biographies, the honesty of KINSEY as history is
debatable, as are the doctor's contribution to the health and welfare
of the society. But as a film, KINSEY is like good sex, a briefly
satisfying mix of passion and amusement.