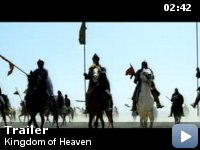 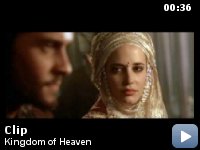 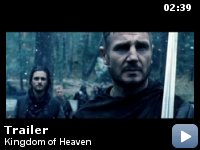 Balian of Ibelin travels to Jerusalem during the crusades of the 12th century, and there he finds himself as the defender of the city and its people.

Storyline
It is the time of the Crusades during the Middle Ages – the world shaping 200-year collision between Europe and the East. A blacksmith named Balian has lost his family and nearly his faith. The religious wars raging in the far-off Holy Land seem remote to him, yet he is pulled into that immense drama. Amid the pageantry and intrigues of medieval Jerusalem he falls in love, grows into a leader, and ultimately uses all his courage and skill to defend the city against staggering odds. Destiny comes seeking Balian in the form of a great knight, Godfrey of Ibelin, a Crusader briefly home to France from fighting in the East. Revealing himself as Balian's father, Godfrey shows him the true meaning of knighthood and takes him on a journey across continents to the fabled Holy City. In Jerusalem at that moment–between the Second and Third Crusades–a fragile peace prevails, through the efforts of its enlightened Christian king…

Taglines:
Be without fear in the face of your enemies. Safeguard the helpless, and do no wrong

In the 'burning bush scene' in the Director's Cut of the film, Balian's horse jumps as the camera pans across the desert, just after the character of the Hospitaler (David Thewlis) has 'disappeared', thus enhancing the sense that the character is a spirit of sorts. According to director Ridley Scott, the horse did this completely spontaneously as the scene was being shot.

Squire:
Clear the road, if you will.

"Kingdom of Heaven": A Near Masterpiece


In 1935, Cecil B. DeMille made his famous epic "The Crusades" on one of
the backlots of Hollywood. What a change in the Ridley Scott film
"Kingdom of Heaven" of 2005 with the technical wizardry of a new era!
Although it is not a perfect film, it is nonetheless skillfully crafted
and well worth the time of any film-goer in our current, troubled age.

From the visual and technical standpoint, "Kingdom of Heaven" is
masterful. The recreation of medieval France and the city of Jerusalem
were brilliant technical achievements. The French landscape recalls the
region around medieval Clermont and Vézelay where Pope Urban and
Bernard of Clairvaux delivered their momentous calls to arms for the
early Crusades. And in the recreation of Jerusalem, the film artists
truly drew us into the twelfth-century walled city with sacred roots in
Judaism, Islam, and Christianity. Much credit should go to
cinematographer John Mathieson, costume designer Janty Yates, and all
of the film's art directors. The film's events spanned the era between
the Second and Third Crusades, and the evocation of this epoch was
simply spectacular.

In the genre of the epic film, the leading actor is crucial, as in the
unforgettable performances of "Lawrence of Arabia" (Peter O'Toole),
"Tess" (Nastassja Kinski), and "Bridge on the River Kwai" (Alec
Guiness). One weakness of "Kingdom of Heaven" is leading performer
Orlando Bloom. Although this young actor has fine screen presence, his
performance was subdued and monochromatic. The Crusaders were driven by
zeal, and Bloom's character Balian seems mired in melancholia following
the death of his infant child and the subsequent suicide of his wife.
Bloom's character does not even evolve much when upon arriving in
Jerusalem, he falls in love with the mysterious Sibylla. Neither
courtly love nor the fires of faith could ignite a spark of passion or
change the expressionless, emotionless face of Orlando Bloom. As
Sibylla, Eva Green also seemed out of place in this film. The closest
historical prototype for her character was the formidable Eleanor of
Aquitaine, who accompanied her husband King Louis on the Second
Crusade, during which Eleanor had a stormy affair with her uncle
Raymond of Antioch. Eva Green's character seemed closer to a young
woman from the twenty-first century, as opposed to the twelfth.

Other performances were stronger, including those of Liam Neeson as
Balian's father, Jeremy Irons as Tiberias, and Edward Norton as the
King. Those actors really resembled medieval knights. Norton's
characterization of the king victimized by leprosy and forced to wear a
mask was one of the most sensitive character portraits since Ralph
Fiennes' role as "The English Patient." Norton's characterization
offers a glimpse into the softer side of the great medieval knights,
such as the legendary Richard the Lionheart, a poet and troubador, as
well as a king. Ghassan Massoud also merits praise for his portrayal of
Saladin as not only a brilliant general, but a figure of great dignity.

At a time when we are at war in the Middle East, the screenplay and
dramatic impact of "Kingdom of God" were thoughtful and worthy of
serious reflection for any film-goer. I was especially struck by the
theme of honor that ran through the film. The actions of the main
character of Balian were guided by honor. And the character of Saladin
was portrayed as an individual of great moral rectitude. The Western
cultural heritage of chivalry, courtly love, and honor filtered into
Europe through Islamic traditions, which "Kingdom of Heaven" seems to
acknowledge. There is a powerful moment in the film where Saladin
discovers a small Christian cross that has toppled over. He takes the
time to pick up the fallen cross and set it aright. In a film filled
with special effects and spectacular scenes of siege warfare, that
moment of simplicity was the most meaningful and important one for me.