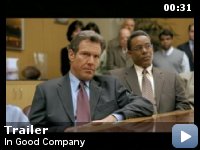 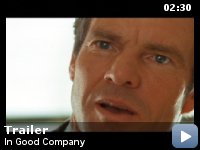 A middle-aged ad exec is faced with a new boss who's nearly half his age… and who also happens to be sleeping with his daughter.

Storyline
Dan Foreman is headed for a shakeup. He is demoted from head of ad sales for a major magazine when the company he works for is acquired in a corporate takeover. His new boss, Carter Duryea, is half his age–a business school prodigy who preaches corporate synergy. While Dan develops clients through handshake deals and relationships, Carter cross-promotes the magazine with the cell phone division and Krispity Krunch, an indeterminate snack food under the same corporate umbrella. Both men are going through turmoil at home. Dan has two daughters, Alex, age 18, and Jana, age 16, and is shocked when his wife tells him she's pregnant with a new child. Carter, in the meanwhile, is dumped by his wife of seven months just as he gets his promotion. Dan and Carter's uneasy friendship is thrown into jeopardy when Carter falls for, and begins an affair with, Dan's daughter Alex.

Taglines:
He's rich, young and handsome. He's in love with you and he's your dad's boss.

The studio wanted someone from the cast of
That '70s Show for the role of Carter and had originally given it to Ashton Kutcher. Kutcher dropped out due to creative differences, and Topher Grace auditioned and got the part. Grace had auditioned four times for the role, and had to convince producer Paul Weitz that he was right for the role, by highlighting his raising by his father, a businessman with sharp negotiation skills.

Continuity:
When Carter and Dan are having lunch in the sushi restaurant, there is a point where Carter offers Dan sushi. In two sequential shots of Dan, meant to be in sequence, the same woman in red enters from the right and walks behind Dan.

Anchorwoman:
After months of speculation, analysts expect an announcement this week that GlobeCom International will acquire Waterman Publishing and its flagship magazine, Sports America. The man at the helm of GlobeCom, billionaire media magnate Teddy K., has been on a spending spree recently…


Got in to see one of those audience recruited screenings. I was
expecting sort of vanilla type movie, but was VERY PLEASANTLY
SURPRISED…it is GOOD! Not superb, but definitely fun, original and
very very topical! Dennis Quaid plays an ad exec whose company is taken
over by a big conglomerate. Topher Grace, who is half Dennis' age,
becomes his boss, and we see the dramatic and comedic dynamic (too may
"ics") of the two men as they try to cope with an in flux work and home
life. Dennis Quaid and Scarlett Johansson are very good, but Topher
Grace is the body slam surprise performance here. Also, as a bonus for
the audience, all the supporting cast is filled in with great character
actors. I hate spending ten bucks on a ho-hum movie, but this one is
definitely worth it. Story-9, Acting-8, Humor-9, Drama-8….OVERALL:
8.5