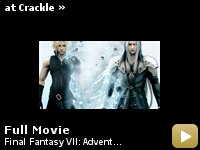 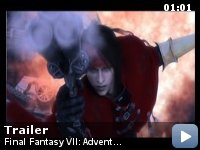 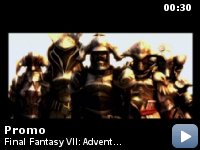 An ex-mercenary is forced out of isolation when three mysterious men kidnap and brainwash the city's children afflicted with the Geostigma disease.

Storyline
Two years after the events in "Final Fantasy VII", a disease called 'Seikon-Shoukougun', or 'Geostigma', is spreading through the planet. This disease is believed to have been caused by the body fighting off foreign material that invaded the body two years earlier, at the end of "Final Fantasy VII". Guilt-ridden and haunted by his past, ex-SOLDIER Cloud Strife has decided to live a secluded, solitary life away from his friends while maintaining "Strife's Delivery Service", whose headquarters is located in Tifa Lockheart's bar, the Seventh Heaven. Tifa's bar serves as an orphanage for children stricken with Geostigma. Here, Tifa keeps an eye on Barret's six-year-old daughter, Marlene, while Barret searches the planet for an alternative energy source to the Planet's energy, Mako. One day, Cloud receives a phone call from the former Shinra…

Bahamut is a recurrent creature in the Final Fantasy series, in Final Fantasy VII (Psx) there's three of them, Bahamut, Neo Bahamut and Bahamut Zero, this time in the movie its called Bahamut Sin.

Revealing mistakes:
In the scene when Cloud comes to fight Bahamut, while taking the sword from the bike, the sword model is briefly seen passing through the other sword model.

Elena:
Tseng! Look at this.

Excellent on all fronts…unfortunately, I doubt it will reach an audience outside of FF7 fans


Graphics: brilliant, obviously. The most stunning things were
definitely NOT given away in the trailers. Fight sequences move
extremely fast, but after watching a couple of them your eyes should be
used to it and it won't seem so confusing. Cloud has a wide array of
swords, and I kinda wish things were moving a LITTLE slower just so we
could see them, because they were each incredibly detailed. Oh, and we
finally get to see exactly how one equips Materia…


Music: brilliant also. I was a bit nervous about it, since (from what
I've seen) Nobuo isn't the best at writing music to go along with
action (remember the Steal the Tiny Bronco sequence?), but it's
brilliant and it fits perfectly. I'm glad I preordered the OST. They
changed the lyrics to One Winged Angel though, so you won't be able to
sing along if you know the Carmina Burana Lyrics.

Plot: the first half of the movie sets up things and introduces
everyone in a fairly complex tapestry, but the second half is almost
entirely fight sequences, once all the players are in place. I wouldn't
call it a weak plot, but it's nowhere near as convoluted as the game's
plot was. I think this is in an effort to avoid trying to overshadow
the game, and I think that's a good thing…the movie is its own
entity, and shouldn't try to top the original in terms of sheer plot.

I admit, I was kind of hoping that this movie would bring FF7 to a
wider range of people, but this is NOT a mainstream movie. I was going
to give it only nine stars, just because it doesn't even really try to
explain anything to newcomers…Marlene (at least I think it was
Marlene…sounded like her) gives a bit of background at the beginning,
but it's more of a refresher than a crash course. But then I realized,
for me this movie is a 10/10, so why should I take off points just
because other people probably won't like it as well…if you've played
the game, or are at least passingly familiar with it, you should see
this movie. But you don't need me to tell you that. If you're not
familiar with it, go out and buy it, sit there for twenty hours and
beat it, and then see the movie…although even without any background,
it's still stunningly beautiful. You just won't get any of the inside
references…which make up 50% of the movie (that is, everything that
ISN'T a fight sequence).