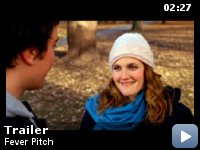 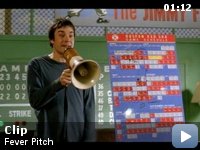 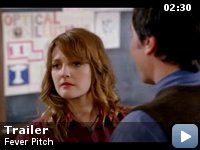 Lindsay is stuck in the middle of her relationship with Ben and his passion for the Boston Red Sox.

Storyline
When relaxed and charming Ben Wrightman meets workaholic Lindsey Meeks she finds him sweet and charming, they hit it off and when it is winter Ben can spend every waking hour with Lindsey, but when summer comes around the corner Lindsey discovers Ben's obsession with the Boston Red Sox. She thinks it is perfect until everything goes downhill for them.

Taglines:
A Comedy About The Game Of Love.

Ben has a gigantic replica of Fenway Park's left field wall (a.k.a. "The Green Monster") on the wall of his apartment. In real life and in his apartment, the wall includes a hand-operated scoreboard. The particular game immortalized on Ben's mural is that of Game 3 of the 1999 American League Championship Series, won by the Red Sox over the N.Y. Yankees, 13-1. Before Boston's conquest of New York in 2004 (depicted at the end of the film), the '99 game was one of the most memorable Boston wins in recent memory.

Continuity:
When Lindsey is talking to her mom in the kitchen, you can see a glass of beer by a plate of cookies. In the next shot the glass is gone then it reappears in the next shot beside the coffee pot.

Al:
[voice over]
Eighty-six years of bangin' our heads against the big green wall, but we finally did it. That part you know. That part everybody knows. But I got a story you don't know. It's about this schoolteacher friend of mine named Ben.

A Classic (and great!) Romantic Comedy

What I got: An even-handed story where both guy and gal end up
admitting — to themselves and each other — that they each have
passions in their lives yet each can forgive the other to save the love
they share.

Sounds sappy but with the nonstop humor and terrific performances this
story works! Barrymore is classic Barrymore: that perfect blend of
sweet, strong, and adorable. We expect that from her and she delivered.

But Fallon is the nice surprise in this film. He brings to the role the
perfect blend of sports nut combined with the appreciation for the
normal things in life, like caring about kids and his girlfriend.
Fallon delivers his lines with subtle perfection. He can be caring
("You just ran across the field for me!") and in the same breath be
obliviously blinded by his love for the Red Sox ("How did the grass
feel? Kinda spongy?") at the same time. Fallon's portrayal "made" the
movie. Hopefully, this movie marks the beginning of a better film
career for Fallon, something beyond the over-the-top sophomoric humor
typical of SNL alums (i.e. Will Ferrell).

In short, a movie that could have fallen victim to stereotypical male
vs. female characters rose above that limitation and provided nonstop
spot-on humorous lines, most delivered with brilliant subtlety by
Fallon.

Hey, I saw this with my wife — not a baseball fan — and she loved it
as much as I did. It's neither a "Guy Flick" nor a "Chick Flick". It's
a terrific make-you-laugh flick. Go see it!