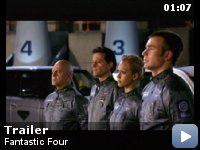 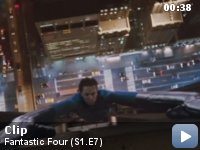 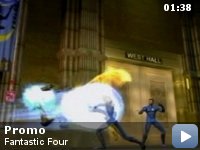 A group of astronauts gain superpowers after a cosmic radiation exposure and must use them to oppose the plans of their enemy, Doctor Victor Von Doom

Storyline
Reed Richards, a brilliant but timid and bankrupt scientist, is convinced that evolution can be triggered by clouds of cosmic energy, and has calculated that Earth is going to pass one of these clouds soon. Together with his friend and partner, the gruff yet gentle astronaut muscle-man Ben Grimm, Reed convinces his conceited MIT classmate Dr. Victor Von Doom, now CEO of his own enterprise, to allow him access to his privately-owned space station. Von Doom agrees in exchange for control over the experiment and a majority of the profits from whatever benefits it brings. He thus brings aboard Susan Storm, his shy, though assertive chief genetics researcher and a former lover of Reed's with whom she had an acrimonious break-up, and her diametrically opposed brother Johnny, the maverick and hot-headed playboy pilot. The astronauts make it home intact; however, before long they begin to mutate…

This was the third superhero movie to be released in 2005, after
Elektra and
Batman Begins.

Revealing mistakes:
When Doom hits Ben with the light pole and Ben hits the ground, concrete from the street comes up before he actually hits the pavement.

Ben Grimm:
Typical of Victor Von Doom to build a 30 foot statue of himself.


This film was well put together, fun, and didn't take itself at all
seriously. I am not sure where the negative hype comes from, but I find
when a good film gets bad reviews, that means most people just didn't
get it. In this case, perhaps from the last few comic book films that
attempted to "mean something," I think people forgot how to enjoy
themselves. Laden with kitsch and tongue-in-cheek humor, this movie
embraces that it comes from a comic book and allows itself to be big
and a little silly. Yes, Jessica Alba wears an impossibly tight
jumpsuit. Yes, the Human Torch is so slick and charming that, if you
met him in real life, he'd get a solid smack for his arrogance. But
this isn't real life, people, in case you forgot-this is the Marvel
Universe, where clothes are tight and the dialog…isn't. Who cares?
This movie is so fun that you wish these people did exist and would
take some media focus off the jerks that are in the public eye.