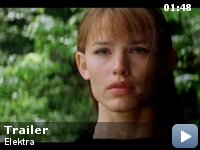 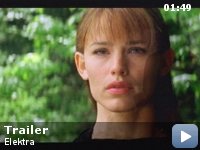 Elektra the warrior survives a near-death experience, becomes an assassin-for-hire, and tries to protect her two latest targets, a single father and his young daughter, from a group of supernatural assassins.

Storyline
In the ultimate battle between good and evil stands a warrior who makes the choice that tips the balance. A strong, mysterious and a deadly sexy action heroine – a lethal synthesis of grace and power. Not long after recovering from seemingly mortal wounds, Elektra has severed all ties with the world, living only for her next assignment. But in an unexpected turn of events, she is forced to make a decision that can take her life in a new direction – or destroy her. Key players in Elektra's journey are Stick, a blind martial arts master responsible for Elektra's "resurrection," and Mark Miller and Abby Miller, a father and daughter on the run from The Hand, a powerful syndicate whose members practice the dark martial art of ninjitsu.

Scenes from one promo, depicting Mark Miller (Goran Visnjic) effectively fighting off ninjas at his waterfront cabin, were deleted from the theatrical release.

Continuity:
When Elektra is in a bikini after swimming, her wound can be seen on the top of her stomach. However in the previous scene, when she is underwater, there is no wound.

DeMarco:
You can't stop her. Nobody can stop her.

DeMarco:
I was afraid if I told you, you wouldn't take the job. I never should've hired you.


I saw this movie at a free preview screening. I wasn't expecting much
because comic book movies are usually disappointing, but this one was
actually good. The special effects and action sequences were well done
and didn't look over-the-top.

The cinematography was beautiful and the colors almost seemed alive,
they were so vibrant. I don't see many movies where the colors make
that much of an impact.

I didn't find the dialogue corny or forced. There was only one moment
where the audience laughed "inappropriately," and that was at a
character's name. The acting was excellent, in my opinion. Jennifer
Garner and Goran Visnjic have a natural rapport and Kirsten Prout was
very impressive. I hadn't seen her in anything previously. All three of
them did a good job of giving these characters some depth and making
you care about them, which can sometimes be hard in this type of movie.
The villains were, for the most part, subtle and not in your face, as
with many movies of this genre.

Overall, I liked this movie and recommend it to anyone who likes a good
action movie with non-cardboard characters. In addition to the action,
there is drama, romance (but not too much), elements of sci-fi and a
few laughs.