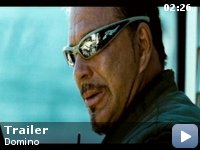 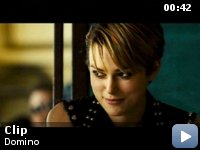 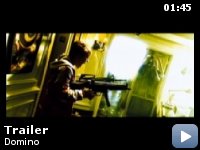 A recounting of Domino Harvey's life story. The daughter of actor Laurence Harvey turned away from her career as a Ford model to become a bounty hunter.

Storyline
The daughter of an actor father and a social-climber mother, Domino Harvey, bored with her life, decides to join the team of Ed Moseby and becomes a bounty hunter. But she gets in trouble when the Mafia's money is stolen from an armored truck, while Moseby and his crew are participating in a reality show produced by Mark Heiss. The situation gets out of control when the sons of a rival mobster are kidnapped while the FBI is monitoring two gangs of mobsters.

Taglines:
Based on a true story – sort of…

At one point in the 1990s, Sharon Stone was attached to play Domino.

Continuity:
During the bounty hunting seminar, Claremont holds a microphone in the opening shot; this disappears in the second shot, but reappears in the next.

Claremont Williams:
Why would you use Jerry Springer as a platform for some kind of progressive race modification proposal, anyway?

A little editing would've been nice.


My reaction to Domino is about as mixed as the mixed race flowchart
that Mo'Nique presents on The Jerry Springer Show during the movie (I
know, that doesn't make much sense unless you've seen the movie). I
dare you to not laugh once she starts introducing terms such as
Blacktino, Chinegro, and Japanic. I suppose if you suck at the teat of
political correctness then you might not get the joke, but otherwise
it's one of the funnier scenes in the movie (the running 90210 joke
being the funniest). At this point you're probably wondering what in
the world Mo'Nique, Jerry Springer, mixed flow charts, and 90210 have
to do with a movie about bounty hunters. It's a legit question. All I
can say is welcome to the unconventionalism that is Domino.


I didn't mind the fact that this isn't very conventional, but at times
it does feel a little convoluted. By the end of the movie I was pretty
clear regarding what was going on, unlike the 'tard in front of me who
couldn't decipher the concept of flashbacks, but the script does feel
unnecessarily complex. Yeah, the movie kept my interest and is fairly
entertaining, but it was just begging for tighter editing. Trimming
about 20 minutes would've made the story stronger and the narrative
more fluent. My guess is that Scott was experimenting and just couldn't
bear to get rid of anything (Tom Waits' cameo especially felt
unnecessary).

Tony Scott's made a movie that appears to be something he and his
friends could most enjoy while under the influence of substances of a
dubious nature. I can deal with the frantic pacing, the quick camera
cuts, and the strange coloring, but is it really necessary to show
characters saying the same line multiple times from different angles?
Sometimes it's all just a little too weird for the sake of being weird.

One of my biggest complaints is that we mainly know that Domino is a
bounty hunter because she tells us about 24 times in her narration,
which starts to grate on the nerves after a while. I would've preferred
to see a little more focus on, you know, her actual bounty hunting.
SHOW us why she was a really good bounty hunter; don't just tell us
over and over. I was expecting some really cool scenes with Mickey
Rourke and Keira hunting down their bounty, showcasing the technical
side of the hunt, and wrapping it all up with cool, tough-guy (and
girl) bounty hunter stuff. Maybe a little sniping here, a vicious beat
down there. Sadly, it never came.

Do I remind everybody that I'm a reviewer by pointing out in every
single review that, "I'm Johnny Betts. I'm a movie reviewer"? No, I do
my job and show you what it is that makes me a movie reviewer!

Uh, well, I guess we all get mixed reactions sometimes.