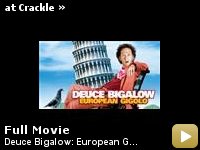 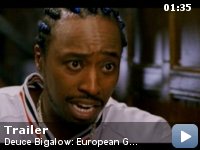 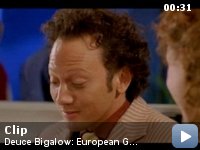 Deuce is tricked again into man-whoring by T.J., only in Amsterdam while other man-whores are being murdered in his midst.

Storyline
Deuce Bigalow ('Rob Schneider' ) goes to Amsterdam after a little accident including two irritating kids and a bunch of aggressive dolphins. There he meets up with his old friend TJ Hicks ('Eddie Griffin' ). But a mysterious killer starts killing some of Amsterdams finest gigolos and TJ is mistaken for the extremely gay murderer. Deuce must enter the gigolo industry again to find the real murderer and clear TJs name.

Continuity:
When Deuce and T.J. stop to talk after leaving Chicken & Waffles, the same red-headed lady in blue can be seen behind each one of them even though they stand facing each other.

T.J. Hicks:
[T.J. is in Jail, and is testing all the Prisoners for their orientation]
Hey, let me give you the low-down on T.J. Now, some time ago, I used to be a sideshow host at a Circus, I played the role for eating broken glass. So we di about two shows a week, now that's a lot of broken glass, and it's all collected right in the line of my anus… my *ass* is like one damn cheese grater!
[the Prisoners all stand, and glare at him]

Made in Holland and Made for Holland


Some of the comments here about this movie say that this movie is
depicting the Netherlands wrongly. Drugs, prostitution and naked
weather(wo)men. How crude!

I think this movie is a cute spoof on the Netherlands. Of course we
don't have naked weatherwomen (unfortunately), but indeed we have
coffee-shops which are very much unlike Starbucks, and although the
legal status of prostitution is vague, it's not prohibited in certain
areas in the country and indeed the prostitutes do pay taxes and have a
health care plan. So in a sense it's true, albeit a bit over the top –
for amusement value.

The movie shows some nice areas of the country, like the windmills, old
cobblestone streets and canals. And it has a huge slew of famous and
not-so-famous Dutch celebrities, which actually makes this movie fun to
watch for a Dutchman! In fact, I think Dutch moviegoers would rate this
movie higher than an American would do, as the latter might not get the
tongue in cheek humor depicted within. Americans may even be offended
at how the war in Iraq is mentioned by a Frenchman, and the aggression
against people waving an American flag, sending out a political stab by
Mr. Schneider.

There is much eye for detail, like the shirts Deuce is wearing, or the
fact that he calls Eva 'ay-va' as the Dutch would do, the fun with the
street name ('Nieuwezijds Voorburgwal', notorious in Holland for its
red-light district) and the names and phone-numbers in the little black
book (DVD freeze frame).

So, being Dutch myself, I found this flick pretty amusing!

PS. the cover of the Dutch version DVD is much more appropriate,
showing an Amsterdam pavement divider post ('Amsterdammertje') instead
of the Italian (!?) Leaning Tower of Pisa.