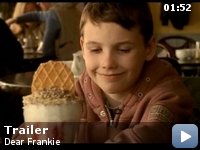 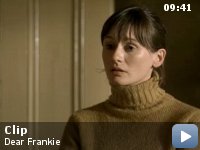 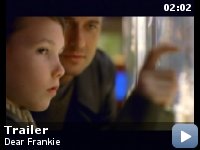 After having responded to her son's numerous letters in the guise of his father, a woman hires a stranger to pose as his dad when meeting him.

Storyline
Nine-year-old Frankie and his single mum Lizzie have been on the move ever since Frankie can remember, most recently arriving in a seaside Scottish town. Wanting to protect her deaf son from the truth that they've run away from his father, Lizzie has invented a story that he is away at sea on the HMS Accra. Every few weeks, Lizzie writes Frankie a make-believe letter from his father, telling of his adventures in exotic lands. As Frankie tracks the ship's progress around the globe, he discovers that it is due to dock in his hometown. With the real HMS Accra arriving in only a fortnight, Lizzie must choose between telling Frankie the truth or finding the perfect stranger to play Frankie's father for just one day…

The song that plays while Lizzie (Emily Mortimer) is sitting on a bench crying after a fruitless attempt to find a "daddy" for Frankie, is written by one of the most famous contemporary Estonian composer – Arvo Pärt.

Continuity:
When Lizzie is reading the last letter, it says "Thanks for the book" twice, but it is only read once.

Lizzie:
We had an arrangement. You broke it.

The Stranger:
One more day that's all.

The Stranger:
My ship sails on Monday. There is only one more day.

Lizzie:
Who the hell do you think you are? Who gave you the right to come in here and behave like this?

The Stranger:
You did.

Movie-Making Of The Highest Order


I'm somewhat taken aback by a lot of the criticisms of this
masterpiece. It is a masterpiece in my view, and that "fact" occurred
to me only when examining the cries by the writers here. I found myself
dismissing every single one of them without difficulty.

Firstly, I am aghast at those who are not happy with films that produce
an emotional reaction on the part of the movie-goer, as if to make an
emotive piece of work is somehow limp or uncool or a cop-out. The best
films are those that mirror humanity, whether that be in terms of
violence committed by Man/Woman to Man/Woman, love, hate, envy,
ambition and the others which make up the full range. Let us be clear:
any film that deals with pain and heartbreak is not one that is
choosing a soft option. How many of us do not feel pain and heartbreak?
None of us presumably, so to state the obvious, this is valid ground
for the modern writer and director to tread.

The difficulty for the film-maker in 2005 is finding the money to make
a piece of work that is not compromised by commerce: to use music,
action and dialogue in a clichéd manner to satisfy the warped idea of
producers that the masses will only pay money for films that use such
devices. Auerbach manages in this movie to almost completely avoid
these pitfalls. There is no sex, no bulging orchestral interventions,
no truly happy ending. I would however have removed the awful song by
the awful Damien Rice and taken the dopey look off Emily Mortimer's
face when she realised that the stranger was a decent guy as well as a
bit of alright, but these in the end are trifles; for the director
makes us emote without manipulation and without using plot devices
which strain credulity (I don't care what any of you think).

Critics here are being too cynical. The searing melancholy of Bergman
might satisfy them I suspect, but they seem to be missing the fact that
there is precious little humour in this movie. The Mortimer character
here is almost humourless enough for a Bergman movie, as is the
Stranger for the most part, so the criticism of mawkishness isn't
remotely credible. The mother is also a fairly grim presence. Auerbach
could easily have tweaked her film to emphasise or exaggerate the sense
of internal pain of all three leads, but she happily and smartly
eschews still shots of these nomadic characters wallowing in their
isolation. Instead, their internal lives are displayed with a greater
sense of reality. There is a humdrum quality to their lives which is as
it should be if a director is shooting for naturalism. Contrast this
with Leigh's Vera Drake where for more verisimilitude, there should
have been more dirt, more roughness to the people and their homes. True
the working class often prided themselves on cleanliness, but in the
terraced house in Tottehnam I encountered in the late-50s and early-60s
you smell the lack of true cleanliness and see it too.

In terms of characterisation Auerbach also got things right. Far from
The Stranger being too handsome, handsome people can be found anywhere,
and he's a scruff! Furthermore, the idea that he is Mr Perfect is
risible. He is emotionally stunted initially, callous and unfeeling in
his first meeting with Mortimer, and for me – not that I know any
seaman – is plausibly detached from regular land life. The criticism
seems to be that is implausibly seduced by the admittedly dysfunctional
family unit. I don't buy that. His inability to relate to the child
when they meet for the first time is either perfect or too much, but
he's anything like the Disneyland father- manqué some reviewers here
are suggesting. Auerbach has him thawing out very slowly. The movie too
slow? A slicker 95 minute version wouldn't have allowed this. If some
viewers have a retarded attention span that's their lookout.

That the Stranger is won over is not feel-good nonsense, it's entirely
believable and well executed. Why? Because the father instinct is in
all men. He responds to this splendid child in a way that is merely
human. Sure, some men would not have responded, so go on, be cynical,
but then there's no film. And if Mortimer's search for the surrogate
father seems far-fetched, most of us can tell you miseries that the
truth of everyday life is often far stranger than reality.

The denouement is magnificent. I'm rubbish at seeing twists coming in
movies, and I saw this one accidentally. My reaction (look away if
you've not seen the film) when the child first sees the "Father" was,
'he knows he's not his real Dad.' The direction is brilliant, the
acting brilliant or Aerbach got lucky. In the end it doesn't matter;
this key scene is superbly subtle however achieved.

There are indeed moving moments. The gift of the sea horse was
profoundly affecting. The boy's talking to the Stranger to show how he
felt about the crucial surrogate fathering that he's just received
could for me also have been very, very upsetting. The direction of
Frankie at this moment is fantastic: to keep his reaction under control
is how we are: in our lives few lose control, weep hysterically or
throw the punch. Frankie doesn't here, so tears us apart.

Finally, the real father: moral ambiguity? Life has many of these
moments. I don't agree with the point anyway. Mortimer's reaction to
the violent father is beautifully poised between the hard-heartiness
part of her wants to show him and the dignified humanity the other part
of her wants to reveal.

Such precious, subtle moments make for a tremendous piece of
film-making. Fortunately most reviewers here liked the movie. If that
weren't the case, we might as well all give up and start praying for
the human race.