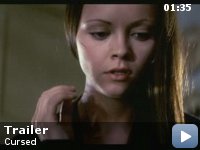 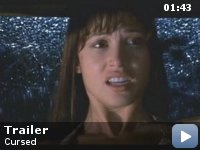 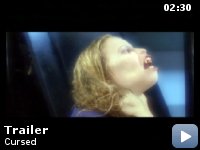 A werewolf loose in Los Angeles changes the lives of three young adults, who, after being mauled by the beast, learn they must kill their attacker if they hope to change their fate to avoid becoming werewolves too.

Storyline
Ellie has been taking care of her younger brother Jimmy since their parents death. One night after picking him up from a party they are involved in a car accident on Mullholland Drive. While trying to rescue a woman from the other car a creature attacks and kills her, also injuring both Ellie and Jimmy. After some research Jimmy realizes the creature could only have been a werewolf.

Taglines:
Have you ever felt like you're not human anymore?

The cane on display in the beginning of the movie is the same one used in Storm of the Century by Stephen King.

Continuity:
When Ellie and Joanie are arguing in the hallway at Ellie's office, first Joanie's hair is over her shoulder and her purse is on her arm. Then, no purse, and her hair is behind her shoulder. Next, hair is forward and purse is back on her arm.

Zela:
Don't let this get up fool you; I have the gift. I blame my mother.


Ellie (Christina Ricci) and her brother Jimmy (Jesse Eisenberg) are on
their way home when they get into a car accident. While trying to help
the other driver out of an overturned vehicle, the other driver is
attacked by what Jimmy swears was a "huge man-like wolf". Both Jimmy
and Ellie end up scratched and possibly bitten by the creature. When
they begin noticing strange physical effects and behavior–including
both of them suddenly becoming more assertive socially–they begin to
wonder if a werewolf has bitten them. If so, will they turn into
werewolves, too?


Cursed had a notoriously difficult time making it to the screen. It
began production in 2002, then went through four major shoots with 90%
of the material being tossed out at one point. Major characters, played
by major actors–including Freddie Prinze, Jr. and Skeet Ulrich–were
in and out of the film. Director Wes Craven even ended up abandoning
the film altogether when Dimension Films chairman Bob Weinstein
demanded a PG-13 cut rather than Craven's initial R. Someone else did
the final PG-13 cut. As should be expected, these events appear to have
harmed the film.

As the theatrical release stands, chunks of the film appear to be
missing. For example, we see Jimmy and Ellie both pretty convinced that
they're werewolves shortly after Jimmy first begins researching the
symptoms and Ellie thinks he's being ridiculous. The transition is not
convincing; there seems to be exposition missing. There are a number of
such choppy, non sequitur moments. The film doesn't flow very well.

The most obvious material to be cut–during and after "attack"
scenes–surely hurt the film, as well, although part of the problem
with these scenes may have been Craven's fault. Like too many recent
films, attack scenes are shot blurry, cut way too fast, and they're
often too dark. Part of the idea might have been to make the CGI less
obvious, but I'd rather have obvious CGI than incoherent scenes.

One final flaw was that the werewolf material in the film wasn't
handled very clearly. Whether this was yet another editing problem or a
script problem from screenwriter Kevin Williamson is difficult to say,
but the film's werewolf "rules" are never well explained. For example,
it's never quite clear why the werewolf would want to attack people
again and why they wouldn't just be full-fledged lycanthropes the first
time. Although this makes a bit more sense later in the film, werewolf
"rules" are still implied that are never explained but needed to be.

But there are a number of positive aspects to the film. Craven shows
that he hasn't lost his love of postmodernist reference and theatrical
"wall breaking", the performances are good, occasionally the film is
suspenseful (the car crash near the beginning is especially well done),
and Williamson's story overall is intriguing in that Cursed is really a
somewhat traditional thriller in which characters just happen to be
werewolves.

Craven opens the film at a carnival, which is obviously theatrical, and
quickly presents a psychic "performer" who happens to be a "real
psychic", taking her job seriously rather than just providing
entertainment. The parallel is to Craven as a horror filmmaker, which
may often be seen as just an entertainer instead of a "real
illusionist" approaching the job with serious intentions. Then he
quickly takes us to a club, Tinsel, that's a veritable Madame Tussauds
with a Hollywood theme, complete with full, detailed sets. There are
numerous horror references in the club, including to Craven's own work,
such as A Nightmare on Elm Street (1984). This emphasizes the
artificiality of cinema in a way similar to the "real film in a film"
conceit of Craven's New Nightmare (1994). To push this theatrical wall
breaking further, many sets, such as the interior of Jimmy and Ellie's
house, are lit and shot so as to emphasize their artificiality–almost
as if the film were being made on the displays at the Tinsel club.
Craven also has a number of characters working in the entertainment
industry, and like New Nightmare, has celebrities playing themselves.
As a humorous jab at filmic self-reference and comments about his use
of the same in previous films, especially Scream (1996), a pivotal
scene near Cursed's false climax is shot in a very artificial-looking
hall of mirrors (and this is also literally reminiscent of a number of
other horror films, including The Exorcist II: The Heretic (1977), Dr.
Giggles (1992) and The Haunting (1999)).

The fact that Williamson has really constructed a thriller, and it just
appears to be a werewolf film, is a kind of late-film twist that
provides another level of "wall breaking". It's a clever idea that has
some similarities to Williamson's I Know What You Did Last Summer
(1997) script, which continually flirted with the gray area between
thrillers and slasher flicks. Williamson also spends time exploring the
dramatic consequences of Ellie and Jimmy's newfound power.

However, given the final result, at least with the cut I watched, these
more intellectual touches from Craven and Williamson may have ended up
being too hip for the film, which Dimension apparently wanted to sell
as a more by-the-numbers horror flick geared to pull in younger teens
(and a surprising amount of pre-teens in the showing I attended). I'm
not usually one to complain about the existence of PG-13 (or even
tamer) horror, as I do not think that gore, language, etc. are
necessary for a good film. It's not that I dislike gore, but I love the
first three Universal Frankenstein films, say, as much as I love the
Evil Dead series, Romero's zombie films, or any of the Texas Chainsaw
Massacre films (and certainly more than I like, say, Andreas Schnaas'
work, which has the gore but not much else). But when the result of
studios pushing for PG-13 results in such an apparent botch-job, I have
to add my voice to the protesters.