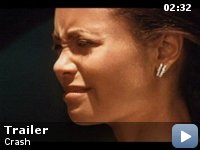 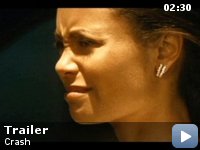 Storyline
Over a thirty-six hour period in Los Angeles, a handful of disparate people's lives intertwine as they deal with the tense race relations that belie life in the city. Among the players are: the Caucasian district attorney, who uses race as a political card; his Caucasian wife, who, having recently been carjacked by two black men, believes that her stereotypical views of non-whites is justified and cannot be considered racism; the two black carjackers who use their race both to their advantage and as an excuse; partnered Caucasian police constables, one who is a racist and uses his authority to harass non-whites, and the other who hates his partner because of those racist views, but who may have the same underlying values in his subconscious; a black film director and his black wife, who believes her husband doesn't support their black background enough, especially in light of an incident with the racist white cop; partnered police detectives and sometimes lovers…

Taglines:
Live your life at the point of impact

The movie was shot in 36 days.

Crew or equipment visible:
When Daniel comes in to speak with Farhad after fixing his lock, two members of the production crew can be seen attempting to hide behind one of the store shelves in the bottom-left corner of the frame.

Graham:
It's the sense of touch. In any real city, you walk, you know? You brush past people, people bump into you. In L.A., nobody touches you. We're always behind this metal and glass. I think we miss that touch so much, that we crash into each other, just so we can feel something.

In a drama strikingly reminiscent in style and tone of P.T. Anderson's
film Magnolia (1999), the narrative in Crash shifts between 5 or 6
different groups of seemingly unconnected characters, whose
relationships to each other are only revealed in the end.

Not to be confused with the David Cronenberg feature of the same name,
this Crash is the feature-length, studio-released directorial debut of
veteran Canadian TV writer/producer/director and two-time Emmy-winner
Paul Haggis. An in-depth exploration on the themes of racism and
prejudice, cause and effect, chance and coincidence, and tragedy,
"crash" is a metaphor for the collisions between strangers in the
course of day-to-day existence. Set over a 24-hour period in
contemporary L.A., it is a social commentary on the interconnectedness
of life in the big city.

Crash features a top-notch ensemble cast which includes: Sandra
Bullock, Don Cheadle, Matt Dillon, Jennifer Esposito, Brendan Fraser,
Chris "Ludacris" Bridges, Loretta Devine, Thandie Newton, Ryan Phillipe
and Larenz Tate. All put in superb performances in a tight script which
is at once gritty, heartwarming, shocking, tragic and witty, and which
will ring true with viewers of all demographics.

Centering around two disturbing car accidents, a carjacking, vicious
workplace vandalism, and the suspicious shooting death of one police
officer by another, the drama is set against the backdrop of a racist
LAPD and Los Angeles justice system. Action shifts between the various
characters, whose lives collide with each other in unpredictable ways
as each faces their own moral dilemma, and tries to cope with the
consequences of their resulting decision made or action taken. Each of
the dozen or so main characters undergoes some type of a personal
metamorphosis as the various story lines head toward a striking, common
conclusion, which succeeds at being both cathartic and unsettling.

Crash is backed by a solid and varied, original soundtrack and
excellent cinematography. Sweeping, wider shots alternate with
disjointed camera angles which convey the chaos and confusion of the
characters and the unpredictability of life. Occasional lingering
close-ups — on occasion without sound — capture the actors' facial
expressions, which suitably detail key moments of the characters'
aching pain, fear, anger, bitter anguish, remorse or grief, far better
than any dialogue could.

This breathtaking film is destined to be a critical smash and
box-office hit. Five stars.