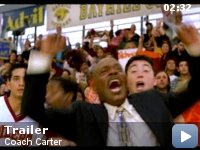 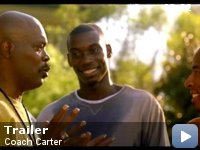 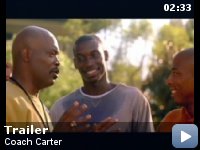 Controversy surrounds high school basketball coach Ken Carter after he benches his entire team for breaking their academic contract with him.

Storyline
In 1999, Ken Carter, a successful sporting goods store owner, accepts the job of basketball coach for his old high school in a poor area of Richmond, CA, where he was a champion athlete. As much dismayed by the poor attitudes of his players as well as their dismal play performance, Carter sets about to change both. He immediately imposes a strict regime typified in written contracts that include stipulations for respectful behavior, a dress code and good grades as requisites to being allowed to participate. The initial resistance from the boys is soon dispelled as the team under Carter's tutelage becomes a undefeated competitor in the games. However, when the overconfident team's behavior begins to stray and Carter learns that too many players are doing poorly in class, he takes immediate action. To the outrage of the team, the school and the community, Carter cancels all team activities and locks the court until the team shows acceptable academic improvement…

Taglines:
It begins on the street. It ends here.

The speech given by Timo Cruz in response to the question "What is your deepest fear?" is an excerpt from "A Return to Love" (1992) by Marianne Williamson. (Commonly misattributed to Nelson Mandela's 1994 Inaugural Address.)

Continuity:
During the scene just after the first training session with Carter, the boys go to a café and Worm is talking about the '2 for 1 offer' with Kyra's friends. Kyra starts off holding a drink in her right hand, but between shots it switches to her holding a paper bag, then back to the drink, before Kyra and Kenyon walk off together.

Not your average basketball movie


While basketball is used as the backdrop for the movie, Coach Carter
really isn't about basketball. The real heart of the movie is in the
way Coach Carter begins to turn the lives around of the players on his
basketball team by showing them that someone actually cares about what
happens to them after high school.


At one point in the movie Carter (played perfectly by Samuel L.
Jackson) asks a player why he plays basketball and he responds with "to
win the state title" – which of course gets him high fives from the
rest of the team. Carter then asks the team who won the state title
last year and nobody knows the answer. Carter tries to show his players
that high school basketball is not about winning but about discipline,
respect and the confidence to accomplish any goal.