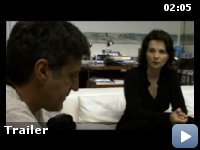 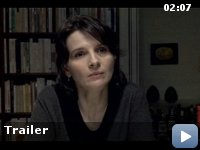 A married couple is terrorized by a series of surveillance videotapes left on their front porch.

Storyline
Georges, who hosts a TV literary review, receives packages containing videos of himself with his family–shot secretly from the street–and alarming drawings whose meaning is obscure. He has no idea who may be sending them. Gradually, the footage on the tapes becomes more personal, suggesting that the sender has known Georges for some time. Georges feels a sense of menace hanging over him and his family but, as no direct threat has been made, the police refuse to help….

Crew or equipment visible:
During the tape where Georges pulls up in his car and parks at night the headlights clearly cast a huge distinct shadow of the camera on the wall.

Georges Laurent:
Isn't it lonely, if you can't go out?

Georges's Mom:
Why? Are you less lonely because you can sit in the garden? Do you feel less lonely in the metro than at home? Well then! Anyway, I have my family friend… with remote control. Whenever they annoy me, I just shut them up.

Seek out the hidden


Perhaps you will attend Caché to see what all the buzz is about. You
will be disappointed. This is not a film to be enjoyed. It is not meant
to entertain you. You should at some point in the film be confused,
even angered, by what is happening. But you will think about it. A lot.
Maybe, you'll start by thinking about the puzzling plot. You'll float a
few theories about whodunit, may be even with the caveat, "not that it
matters with such unlikeable characters." Then, in your search for
answers, you might read comments like the one you're reading right now.
You might read a review or two. You probably won't find the answer
you're looking for, or maybe you'll find many answers. The point is
that in searching for a resolution to complete the narrative, you will
have gone over the clues over and over, replaying each scene in your
head for meaning. You might even go back and watch the film again in
the theatre. Now ask yourself honestly, whether you say you loved the
film or hated it, how many films have had this kind of effect on you?
It might irritate you that a film seemingly so simple has more effect
on your memory than even your favourite films. For this, Caché deserves
credit. Because in forcing you to question every frame, it has advanced
its themes far more effectively than more traditional narratives. You
will never forget that France and Algeria have a dark past. You will
never forget how the terror the couple feels tears at the root of what
they hold dear, and in doing so changes them into unsympathetic
characters. That may not make for two hours of thrills, but it should
get people to think about these issues. The real point the movie seems
to be making is that in our rush to find clues to complete a narrative,
we sometimes lose sight of what's going on. The director here turns us
all into sleuths, scanning the foregrounds and backgrounds, by locking
off the camera and not guiding us as to what to look at. (In this way,
he makes us watch in the same way an autistic person would watch the
film.) We're so wrapped up in this alleged mystery that we hardly
question the motives of the alleged heroes. Is videotaping a home
really terrorizing? After all, people videotape the kids' swim race.
Where do these videotapes cross the line? No one is ever threatened or
harmed by them. Rather it is the paranoia of the TV host, a person who
deals in the editing and manipulation of images for a living, which
lead him into following these leads. It is in his nature to mistrust
the images. It is in his psyche to follow these tapes and the places
they lead him. The farther he follows them, the farther his
subconscious burdens him. His mother says she hardly remembers these
incidents, but Georges has nightmares about them and constructs grand
conspiracy theories about them. Yet when he confronts his childhood
nemesis, Majid seems not to know anything of these tapes and is seen
crying after Georges leaves. Georges is the one terrorizing him instead
of telling him how guilty he feels, which would make him a lot happier.
Majid subsequently does something even more shocking. So who's
terrorizing whom? As hard as it may be, try to think outside the
post-9/11 paradigm and just analyze the facts. The more you do this you
will see that Georges is the architect of his own demise. He is not
responsible for Majid's horrible actions, but he is responsible for not
communicating his guilt with anyone, which might have prevented many of
the events.

TagsFrance Paris TV
A History of Violence
The Proposition