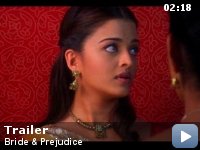 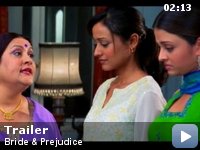 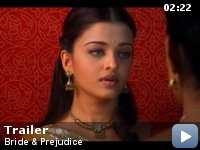 Jane Austen's Pride and Prejudice gets a Bollywood treatment.

Storyline
A Bollywood update of Jane Austen's classic tale, in which Mrs. Bakshi is eager to find suitable husbands for her four unmarried daughters. When the rich single gentlemen Balraj and Darcy come to visit, the Bakshis have high hopes, though circumstance and boorish opinions threaten to get in the way of romance.

Taglines:
Bollywood meets Hollywood… And it's a perfect match

Continuity:
During the confrontation between Lalita and Darcy after the L.A. wedding, Lalita's earrings change. First they match, then one is longer than the other and a slightly different style.

Mr. Kholi:
You know what they say. No life without wife.

Inspired by Jane Austen's Pride and Prejudice, this Western-style
Bollywood musical can't possibly achieve the heights that a union of
the best of East and West movie making and English literature might
suggests, but it manages to fulfil a delightful couple of hours of song
and dance that Western cinema these days struggles to accomplish.


Like the novel, Bride and Prejudice uses the ideas that that first
impressions are often wrong, and that a person can mature if he or she
keeps an open mind. The unlikely courtship of Mr Darcy and (in our
movie) a beautiful Indian girl starts with mutual contempt, but moves
forward as they become wiser and learn that their first instincts,
based on pride, prejudice and illusions, were wrong.

The scene moves between Amritsar and Goa to London and Beverley Hills,
all in brighter-than-bright super-saturated colour, with an assortment
of equally colourful characters, wonderful costumes, lavish dance
pieces and heavenly bollywood-style ballads. While almost everything is
in English (except for a few subtitled songs), nearly all the
characters are top Indian performers.

In the golden age of musicals, stars such as Gene Kelly and Fred
Astaire had a whole sub-industry to draw on for good dancers who could
also sing and act well, plus the technicians used to producing high-end
musicals. As demand waned, so did supply, and the West is now hard
pressed to produce song and dance films that don't rely on snappy
editing to suggest good dancing from top actors, or heavy coaching to
suggest top dancers can act. Bollywood, on the other hand, has no such
shortage, and Bride and Prejudice is the sumptuously choreographed
musical with Indian dancing that has become nigh impossible with
western dancers.

Admittedly it's a bit cheesy at times – but it's self-consciously so,
and as endearing as warm, gushy Indian hospitality. The sets and
dialogue give authentic, if stereotypical, glimpses of Indian life and
values. Like many east-meets-west movies, the stereotypes are a handle
to allow easy assimilation of foreign ideas, and the heavy Indian
involvement wards off any tendency to patronise (which is one of the
themes explored in the film).

This is not high drama or high art, but it's an accomplished romantic
comedy / song-and-dance film, and one that warms the heart and makes
you want to wave your arms in the air Indian-dance-style for the sheer
joy and exuberance of happy endings.