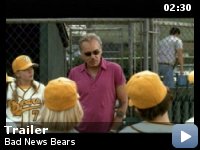 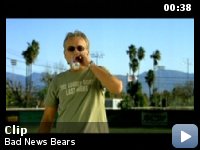 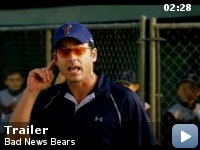 A grizzled little league coach (Thornton) tries to turn his team of misfits into champs.

Storyline
Morris Buttermaker (Thornton), an alcoholic pest removal worker and former professional baseball player (for a very short time), is recruited to coach and train a failing baseball team of 12-year-olds which is about to be thrown out of the league.

The character Matthew Hooper is named after Richard Dreyfuss's character in
Jaws.

Errors made by characters (possibly deliberate errors by the filmmakers):
When Roy Bullock first meets Buttermaker, Greg Kinnear (Bullock) flubs his lines. He says, "stop by and see me sometime, I'm over at Chevy Valley Subaru." The name of the car dealership, as referenced later in the film and as makes sense with standard naming convention, is Valley Chevy Subaru.

Morris Buttermaker:
Come on guys, remember what I told you, there's no "I" in team

Rock 'n roll update–not all that different, but dispiriting…


Unskilled, belligerent group of young boys on a losing Little League
baseball team get an alcoholic coach who eventually cleans up their
act–and his own. Any film-buff well acquainted with the 1976 Michael
Ritchie film "The Bad News Bears" will watch this remake in a perpetual
state of deprivation. For every new ingredient added (a kid in a
wheelchair, Hooters waitresses on the sidelines, a skateband
interlude), there's a classic sequence dropped, funny lines omitted, a
bracing sense of importance missing, and uncharismatic, non-plussed
child actors who walk through their roles colorlessly. Of course, Billy
Bob Thornton is a terrific substitute for Walter Matthau, but Matthau
didn't carry the original film all by himself, and Thornton isn't fully
in-character anyway (he's just breezing through). The whole early
morning feel of Southern California Little League is missing, and the
urgency of the original is gone, too (those kids had something riding
on these games). Director Richard Linklater obviously was fond of the
1976 version, but he knows the notes without hearing the music; he
supplies updated comedic touches without seeing the relevancy, and his
tone and narrative are doggedly straightforward (except for the strange
opening sequence, which immediately gets the picture off on the wrong
foot). A sad botch. *1/2 from ****

TagsUSA
Charlie and the Chocolate Factory
Must Love Dogs