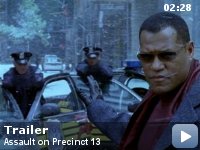 A police sergeant must rally the cops and prisoners together to protect themselves on New Year's Eve, just as corrupt policeman surround the station with the intent of killing all to keep their deception in the ranks.

Storyline
On New Year's Eve, inside a police station that's about to be closed for good, officer Jake Roenick must cobble together a force made up cops and criminals to save themselves from a mob looking to kill mobster Marion Bishop.

Mark Wahlberg was originally offered the role of Jake Roenick but turned it down.

Revealing mistakes:
In the forest scene, after shooting Duvall there was still a round chambered in Roenick's pistol but when Bishop took the pistol there was magazine in it.

Jake Roenick:
Listen to me. What are we talking about, really? Getting high? No. We're talking about a journey, man. A subconscious safari. A mental expedition, OK, a mind trek. This planet has been raped, pillaged and fucked! And the mind is the only uncharted territory
[picks up cocaine]

Jake Roenick:
And this shit is the ship. It's the Nina, the Pinta and the Santa Maria and you… are fuckin' Magellan.
[spills a little bit of cocaine]

Jake Roenick:
So what do you say my Serbian motherfucking friend? Do you want to take a trip or do you want to sit on your ass?

Marko:
Yeah, OK, Napoleon… let's see what you got.

Nowehere near as good as the original, but worth a viewing


A remake of John Carpenter's superior film of the same title from 1976,
Assault on Precinct 13 concerns a siege on a largely abandoned police
station, which is related to the presence of a notorious criminal,
Marion Bishop (Laurence Fishburne). It's left up to a ragtag group of
police employees and criminals to defend themselves.


I should start by noting that I absolutely love Carpenter's original
film. In my view it is one of his best, perfectly capturing the
suburban desolation of 1970s Los Angeles, and exquisitely suspenseful
and horrifying, even though it's not really a horror film. Despite
that, when this remake of Assault on Precinct 13 began, I had high
hopes for it. The first scene is well directed, well shot, with
excellent dialogue. It turns into an intense action scene at just the
right moment, and results in some realistic, gritty deaths. The opening
is as good as anything in the Carpenter film.

Unfortunately, Assault on Precinct 13's excellence ended right there.
It's not exactly a bad film–I enjoyed it more often than not, but it
does have more than its share of flaws. In the end, my rating average
out to a 7 out of 10. Recommendable, but with reservations.

The first problem is that director Jean-Francois Richet tries to do too
much–too much backstory, too many characters, too many over-the-top
characters, too many quick cuts, too much shaky hand-held camera work,
too many "big action moves", too many explosions, too many settings,
and it's too dark. That the film is often so quickly edited and dark
makes it too often difficult to see what's going on in the action
scenes. Carpenter's film succeeded by being very taut, economical,
sober and logical in its directorial style. Richet tries to one-up the
original by forgoing all of those qualities. By the second or third
scene, I was fairly confused. Superfluous characters were popping in
and out, people were mumbling dialogue, and there was a whole complex
backstory being hinted at and not spelled out very well.

The brutal shooting near the beginning of the original film, which sets
off the whole sequence of events, was dropped–that thread was
completely removed from the film. It was lamentable in that this new
Assault loses much of the simple, sensible drive the thread provided,
and it was surely a decision based on political correctness. Likewise,
Bishop is not allowed to be a clear-cut bad guy here. That saps some of
the effectiveness out of his cooperation. In this film, he might be
mostly tough talk. The other criminals in the film are either left
largely unexplained or guilty of only petty or consensual crimes. I
find this kind of political correctness in films reprehensible,
although I realize it's primarily a studio decision.

On the positive side, the villains here were cleverly conceived, and
their nature makes them much more menacing physically. On the negative
side, however, Richet lost the Night of the Living Dead (1968)
zombie-like nature of the marauders, which saps suspense from the
attacks. The logistics of the defense of the police station and details
of their dilemma are not very clearly scripted or staged, either, which
doesn't help. Another flaw is that some intruders seem to inexplicably
hesitate. Another positive, though, is that Richet's film brings back a
few small details, such as the capture of the criminal at the beginning
of the film, and a substance addiction in one of the heroes leading to
a character transformation, found in Rio Bravo (1959), the film that in
conjunction with Night of the Living Dead, was the main inspiration for
Carpenter's original film.

Also on the positive side, this Assault has a skilled (and much more
well known) cast. Even though Richter occasionally directed them to be
a bit too over-the-top, the performances hit many very interesting
notes. And a few of the additions to the original film, such as a
Mexican standoff and a couple later scenes outside the police station
were excellent. The increased firepower here may also be to some
viewer's liking.

A viewer less fond of the original, or even unfamiliar with the
original, may like Assault better than I did. I may have even liked it
better if the original were not so fresh in my memory (I just watched
it again it recently–a review is forthcoming). There are enough
redeeming aspects for action fans to make it worth at least a rental or
a viewing on cable, but approach the film with lowered expectations.