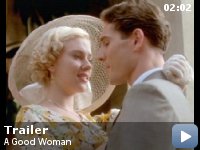 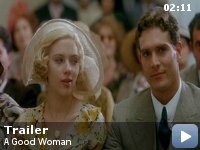 Storyline
In 1930, Mrs. Erlynne, who describes herself as poor and infamous, driven from New York society by jealous wives, sees a news photo of wealthy Lord Windermere and his young wife: she heads for the Amalfi Coast to be among the rich and famous for 'the season' and to snare Mr. Windermere. Gossips twitter as he spends his afternoons with her, his wife blissfully innocent as she blushingly fends off attentions from a young English nobleman, an international playboy who thinks he's in love. Mrs. Erlynne is also pursued by a worldly-wise older English nobleman. Mrs. Windermere's 20th birthday party approaches, where all plays out amid numerous amoral Wildean aphorisms.

Taglines:
Seduction. Sex. Scandal. She's the talk of the town.

Anachronisms:
The instrument being played in the band at the party is not a cornet, but a flugelhorn. In some of the musical selections, the sound heard is that of an unmuted trumpet, in others, it is that of a trumpet with a Harmon mute. The flugelhorn, as shown has an entirely different timbre.

Lord Darlington:
All of which, mind you, si time well spent in my book. So, yes, I take your point, I can't argue. At the club, we'd be with other people. Afraid we'll be seen? Set the chins wagging? Do you know what I find worse than being talked about? Not being talked about at all.

Hi everyone… This is my first ever review, so I'll see how it goes…
I just saw this a few hours ago here at the Rio Film Festival and I
have to say, it was one of the most charming films I've seen this year.
Those who know Oscar Wilde's work should know that it is mostly based
on dialog, and this is no different.. but most of it is so hilarious
that even people who can't stand talk-based movies should have a good
time. The real star of the show here is, in my opinion, Tom Wilkinson.
Helen Hunt and Scarlett Johansson are both very good (as is most of the
cast), but Wilkinson is so endearingly silly that you can't help but
care for him more than the others. So what keeps it from being a
stunner? The same thing that makes it good: it's the type of film you
forget very easily. Nothing is ever too serious about the film and even
though that is a pivotal thing in making it such a good time, it also
makes it very easy for the film to slip out of your mind once it's
over. Also, another thing I noticed (and thought was kind of weird,
actually) was how uneven the cinematography was. You'd have one shot
that was really beautiful and lush followed by one that seemed a little
rushed, and not particularly worked on (those who have seen Barry
Lyndon should notice that some shots, in my opinion, are incredibly
similar, though sunnier – hopefully a reference, not a rip-off). But,
by all means, go see it. It is a wonderful film to see with someone
special, and should provide some very quotable one-liners once it comes
out.

A romantic comedy that is as sleek as it is clever? If that's not
enough reason to go to the movies, I don't know what is. Thanks for
reading, bye!