Win a Date with Tad Hamilton! 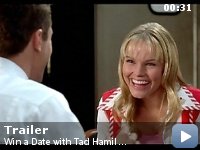 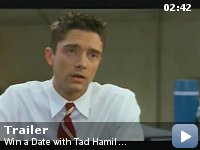 A small-town girl wins a date with a male celebrity through a contest. When the date goes better than expected, a love triangle forms between the girl, the male celebrity, and the girl's best friend.

Storyline
Rosalee Futch is a grocery clerk living in rural West Virginia. But even a small-town girl can have big dreams, and Rosalee's is to someday–somehow–meet her big-screen idol Tad Hamilton. The somehow arrives in the form of a contest–the grand prize: a date with Tad Hamilton–and the someday is now. Rosalee wins, much to the chagrin of her best friend and co-worker Pete, who is deeply, hopelessly–and secretly–in love with Rosalee. The Win a Date contest was cooked up by Tad's agent, Richard Levy, and his manager, also named Richard Levy, to clean up Tad's bad-boy image. Someone should have told them to be careful what you wish for. When Tad meets Rosalee and gets a taste of what he's been missing in the real world, he decides he wants seconds and moves to West Virginia, turning Rosalee's dream come true into a nightmare for Richard Levy, Richard Levy and, most of all, Pete.

Taglines:
In every love story, there's only room for one leading man.

Errors in geography:
As Rosis and Tad leave for Hollywood from the airport in Charleston, West Virginia the scenery at the airport as they are boarding shows rolling hills behind and above the airport. Yeager Airport knows that it sits completely at the top of a mountain in Charleston and there is no higher ground surrounding the airport.


This movie is definitely a "chick flick." Both male leads are played
pretty well. Josh Duhamel portrays the self-absorbed actor well, but
has difficulty being believable when he is supposedly being sincere. Of
course, maybe that's the point. Topher Grace, on the other hand, is
able to portray an emotion in very subtle ways, and is therefore
perfect as the inwardly-tortured old friend.


Kate Bosworth's character seems to be quite one-dimensional, and not
always consistently. She is overly naive, even for a small town hick. I
get the impression that the Hollywood types who wrote her part have
never been to a small town, or at least, not since the 50s. There are
sweet, wholesome people in this world, but they are more realistic than
this girl. It is difficult to ascertain who the protagonist is. Is it
Topher or Kate? His character has more depth than hers, but it appears
that the story revolves around her.

Nathan Lane and Sean Hayes provide much-needed comedy and interest to
the story. I found myself looking forward to their appearances
on-screen. Funny moments and a few good performances make it
worthwhile, but I definitely believe it will appeal more to us women
than the men.