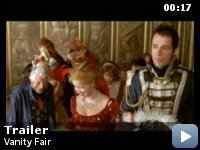 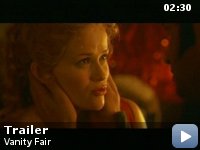 Growing up poor in London, Becky Sharp (Witherspoon) defies her poverty-stricken background and ascends the social ladder alongside her best friend, Amelia.

Storyline
The British Empire flowers; exotic India colors English imaginations. Becky Sharp, the orphaned daughter of a painter and a singer, leaves a home for girls to be a governess, armed with pluck, a keen wit, good looks, fluent French, and an eye for social advancement. Society tries its best to keep her from climbing. An episodic narrative follows her for 20 years, through marriage, Napoleonic wars, a child, loyalty to a school friend, the vicissitudes of the family whose daughters she instructed, and attention from a bored marquess who collected her father's paintings. Honesty tempers her schemes. No aristocrat she, nor bourgeois, just spirited, intelligent, and irrepressible.

The Marquess of Steyne

Taglines:
On September 1st, a heroine will rise.

The sheer brown gown with white embroidery worn by Kelly Hunter (Lady Steyne) at the Prince Regent's party is the same costume worn by Faith Brook (Countess Rostova) in
War & Peace, by an extra at the London Ball in
Episode #2.2, and by a guest at the London ball in
Poldark.

Continuity:
After the dance, Lady Gaunt is next to Mrs. Crawley. In shots from a different angle, she disappears.

The Marquess of Steyne:
They'll bully you and patronize you. But that's what you want I suppose?

Becky Sharp:
I do.

A novel without a hero becomes a film without any bite

Director Mira Nair has said what made Witherspoon the ideal Becky Sharp
was the actress' "American energy and sassiness." Fair enough. But why
did Nair then tame that energy and sass? We see none of it in
Witherspoon's Becky. This isn't the feisty actress who proved she could
play edgy and biting in "Election" and "Freeway" (1996). This is Elle
Woods as Becky, thanks to Nair's misguided decision to turn Becky into
an appealing feminist.

I'm not averse to directors stamping their distinct styles on literary
works, mixing film styles or modernizing old works. But you don't
change the work's crucial essence. You don't transform Goneril and
Regan into caring daughters, for instance.

She and Oscar-winning screenwriter Julian Fellowes – the two other
credited writers, Matthew Faulk and Mark Skeet, reportedly disowned the
film alleging the shooting script bore no resemblance to their work –
have stripped Becky of all her viciousness and cunning. They've
declawed her in a ridiculous attempt to make her likable.

In interviews, Nair and Witherspoon insist they didn't want to make a
typical "bonnet" film. Fine. But you also shouldn't make a film that
doesn't know what it wants to be and lacks emotional resonance. And
that's what Nair's film is.

It sparkles for about a half-hour or so as we see a young Becky, played
pluckily by Angelica Mandy; then, the older Becky (Witherspoon) leaving
school with her friend, Amelia (Romola Garai), and meeting, among
others, Dobbin (Rhys Ifans) and George Osborne (Jonathan Rhys-Meyers).
Later, Becky becomes Sir Pitt Crawley's (Bob Hoskins) governess and
meets her future husband Rawdon (James Purefoy) and Matilda (Eileen
Atkins).

But once Becky heads to London, the film screeches to a halt. With no
one seemingly knowing what the emotional tone should be and the story's
harshness and satiric edge excised, the film grinds at a snail's pace,
the actors slowly sapping all the energy out of it. A scene between
Becky and George at the piano should be tart, their words should sting.
Instead, the two actors labor with the dialogue and make the moment as
sharp as a dull razor.

Adapting Thackeray's massive novel into a feature film was never going
to be easy. But Nair gets more wrong than right. With the exception of
the children, none of the characters age. Gabriel Byrne looks the same
at the end of the film as he did in the beginning, which takes place 40
years earlier. Witherspoon, Garai, Hoskins, Ifans, Purefoy and
Rhys-Meyers also show no hint of aging. And in an attempt to condense
the story, important characters – Amelia and Dobbin, for instance –
disappear for long periods and show up solely to wrap up subplots.

The highlights are Declan Quinn's striking cinematography, performances
by Hoskins and Atkins, the only two who seem to be having any fun, and
a superbly restrained Ifans, playing convincingly against type.

Much has been made about the Indian influence in Nair's story. There's
nothing wrong with them being in the film. Thackeray was born in
Calcutta and the colony's impact was evinced in Georgian English
society. Not only do Nair's Indian touches make the film seem more
vibrant, but the peacocks, parrots and Indian musicians, costumes and
servants also make provocative statements about the exploitation of
India and how the British Empire amassed its wealth. However, no matter
how exotic it seems, Becky's dance just doesn't work and seems like
nothing more than an imprudent attempt to add a foreign film style into
this period piece.

Witherspoon, whose English accent falters occasionally, works
commendably, but ultimately remains unconvincing through no fault of
her own, really. You don't take someone who quips, "Revenge may be
wicked, but it's perfectly natural," and turn her into a sweet, amiable
victim. Witherspoon isn't even remotely as devious as Nair would want
us to believe.

It's unlikely another actress, say Kate Winslet or Kate Beckinsale,
would have fared any better for she'd have worked with the same script
and Nair's foolhardy direction, which includes inexplicably asking
Geraldine McEwan to not so much speak her lines as to squeal them
high-pitched, making the veteran actress' Lady Southdown needlessly
irritating.

This film remains so emotionally lackadaisical that when Becky finally
breaks down before Rawdon, it seems more like a "For Your
Oscar-Consideration" moment for Witherspoon than anything else. By
softening Becky, making her more alluring than calculating, Nair
destroyed the story's spirit. She and Fellowes also tacked on a
ludicrous ending.

As botched film adaptations of literary works go, "Vanity Fair" isn't
nearly as execrable as Roland Joffé's "The Scarlet Letter" (1995). But
I'm confounded as to how the skilled storyteller of "Salaam Bombay!"
(1988) and "Monsoon Wedding" (2001) could have gone so horridly wrong.