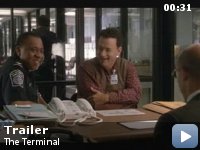 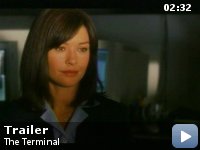 An eastern immigrant finds himself stranded in JFK airport, and must take up temporary residence there.

Storyline
Viktor Navorski, a man from an Eastern European country arrives in New York. However after he left his country war broke out. Suddenly Navorski is a man without a country – or one that the U.S. cannot recognize, thus he is denied entrance to the U.S. However, he also can't be deported so he is told by the Security Manager that he has to remain in the airport until his status can be fixed. And also Navorski doesn't speak English very well, so he cannot talk to or understand anyone. But he somehow adapts and sets up residence in the airport, which makes the man who placed him there unhappy, as it seems he is in line for a promotion but Navroski's presence might complicate that. So he tries to get Navorski to leave but Navorski remains where he is. Navorski makes friends with some of the people who work in the airport and is attracted to a flight attendant he runs into whenever she comes in.


It's funny how Steven Spielberg and Tom Hanks, two of Hollywood's most
powerful men, who could literally do any movie they want, end up making
something like The Terminal. Instead of reaching for new heights of
film-making like including the latest in special effects, or new
original ways of storytelling and editing, Spielberg goes back to a
simpler form. That in itself is surprisingly refreshing. Filmmakers try
so hard to be inventive and change the typical form of the classics,
that when someone finally does go back to that Capra or Wilder fashion,
it ends up seeming original. That's what The Terminal goes for. A movie
about characters, not plot. About emotion, not CGI. It's a true
heart-felt piece of work. It's funny, it's cute, and it always keeps
you interested.

Tom Hanks leads an exceptional cast as Viktor Navorski, a man stranded
in JFK airport, not welcome in the U.S. and having no country to come
home to. Throughout the experience he makes friends, a love interest,
and a rival. He changes all of their lives, of course. That's to be
expected from a movie like this. Tom Hanks is totally believable,
accent and all. It's a performance well worthy of an Oscar nod.

I loved The Terminal for many reasons, but one big reason is it's
simplicity. And more importantly, because it is good at being simple.
It doesn't contribute anything new to movies, it doesn't try to. It is
what it is. A great, feel-good film. Something that is getting rarer
and rarer these days. Sometimes you'll want to see a gritty, wrenching
melodrama, but other times you'll want to see The Terminal.